No 7 Abergele Road is a remarkable Grade II Listed building standing on the north side of Abergele Road, Colwyn Bay not far from its junction with Station Road. The building was originally believed to have been built as a bookshop for the Longman publishing / booksellers company in the early 1930s.   However it subsequently changed hand and by the 1990’s was trading as A & K Cash and Carry.  Sadly the condition of this fine building deteriorated and, despite several offers of generous grant aid by the local authority, the owners couldn’t be persuaded to renovate the building.  However in recent past the building was eventually purchased by the County Borough Council.  It has subsequently been passed on to a Development Trust under whose auspices it is being developed into a culture centre as part of the Lottery Fund’s Imagine Project. 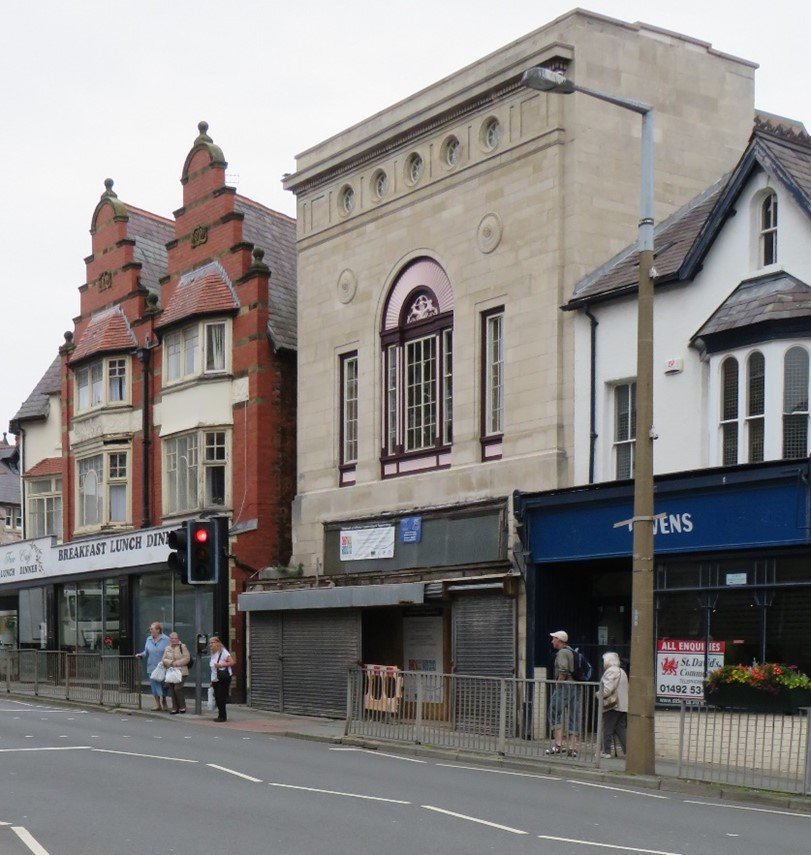 Reference is made in the Listing description of the former Williams Deacons Bank (Bank of Scotland) to Portland stone. One of the distinctive features of No 7, Abergele Road is the ashlar masonry in Portland stone. (Ashlar is where the stones have been worked to even faces and square edges and laid in horizontal courses with vertical joints.)  In No 7 the courses of masonry above the deep course over the shop front are of equal depth until the course corresponding with the lintels of the outer first floor windows and the springing side of the arch above the first floor central window.  Note then the shallow courses in the upper part of the front elevation from just below half way up the five circular windows up to the cornice below the parapet.  Note the dentil course in the cornice. (A dentil course may be described as small square blocks used in a classical cornice).

High on the front elevation, below the cornice there is a frieze incorporating a band of five circular windows with slightly projecting moulded architraves.  Each of these windows has a small round pane of glass surrounded by eight roughly triangular panes.  These circular windows are separated by tall, narrow recessed panels.  These windows are flanked at each end by recessed panels. Each panel consists of two tall narrow panels with a wider panel in between. 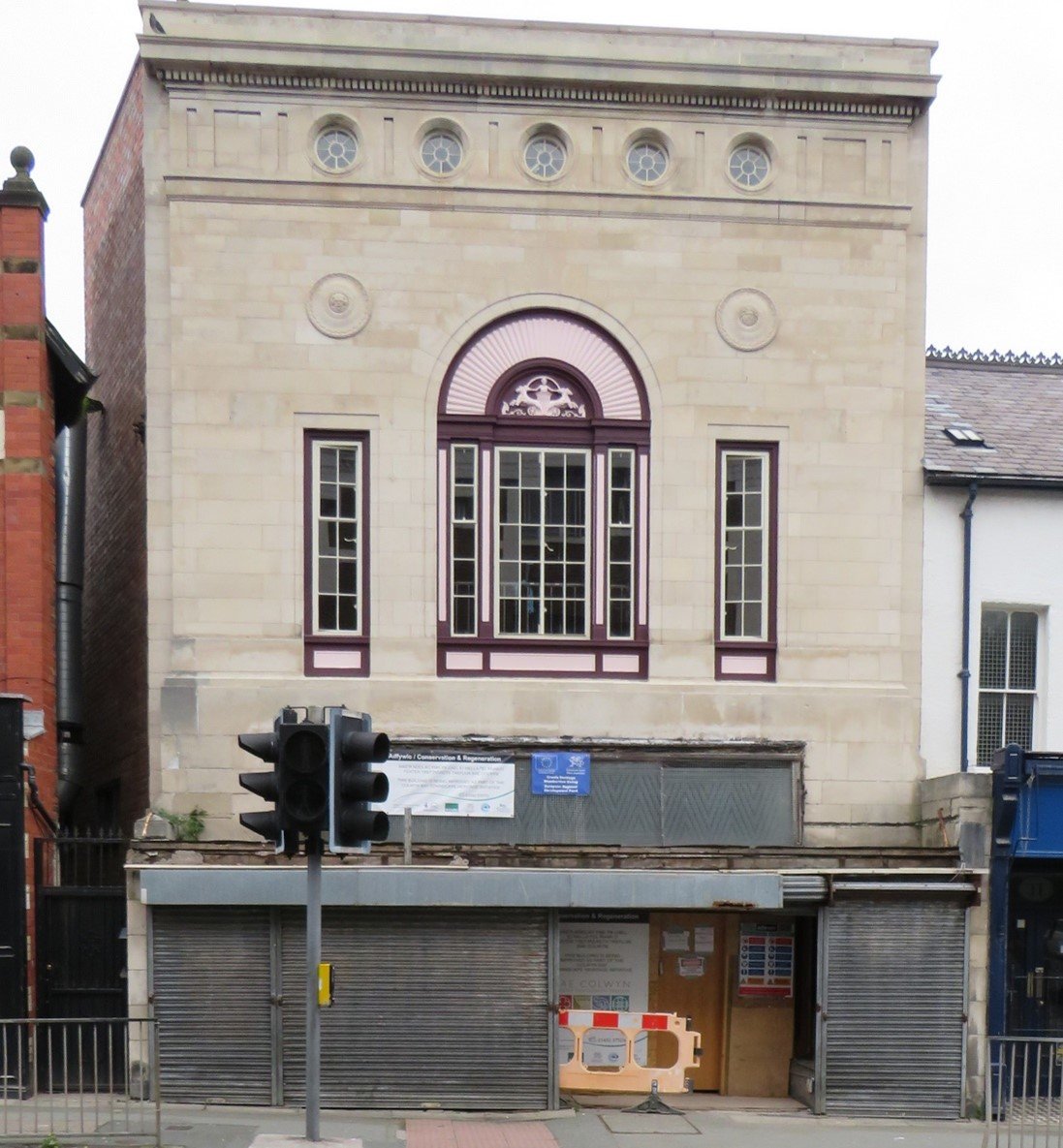 Of particular note and interest are the two “paterae” above the front outer windows.  The Listing details refer to the ”Paterae with masks over the side lights” . (A paterae may be described as a small circular or oval flat ornamental feature resembling a dish and worked in relief on friezes.) 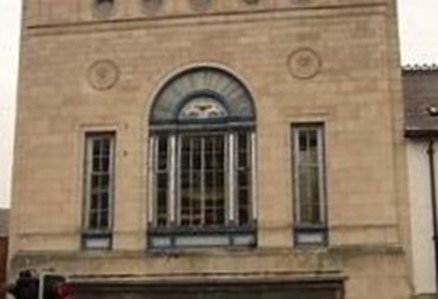 The Listing details refer to the” low relief and radial fluted decoration in the tympanium”.  (A tympanium may be described as the space between the lintel and the arch above it.)  The decoration in the tympanium appears to be a character with horses (or other creatures) on each side.  Above this unusual and interesting feature strips radiate to fill the space under the arch.  The architraves of the first floor windows are set back slightly. (An architrave is a trim which covers the joint between the frame within an opening and the wall finish, particularly at a door or window.)

It is not known how much of the original shop front or any display cabinets, ceilings and the like survive as, at the time of survey (November 3019), the shop front was hidden by temporary hoardings during renovation work.

After referring to No 4 Station Road (currently Peacocks) in his book “The Buildings of Wales (Denbighshire and Flintshire), Edward Hubbard says in respect of No 7 that “this too has a delightful ashlar elevation with details of great sensitivity and refinement”.

The concluding comments of the Listing details state that “The building, although altered, remains as a very good example of the work of the local architect Sidney Colwyn Foulkes working in a Neo-classical idium to produce a highly distinctive commercial building.”

The carvings, dressings, arrises and the like remain crisp and sharp, creating shadows and relief, especially when the sunlight falls at the right angles to highlight the design and detailing. (An arris is a sharp edge of brick or plaster).

This is certainly a building where it is well worth pausing for a while to appreciate its design and detailing and the quality of the craftsmanship.

We are the Colwyn Bay Heritage Group. Our aim is to make the heritage and history of the Colwyn Bay easily accessible and better known amongst those who live here or are  interested in understanding … END_OF_DOCUMENT_TOKEN_TO_BE_REPLACED