A big break in the career of Sidney Colwyn Foulkes came in the 1920s with the commission to design a new hospital in Colwyn Bay. 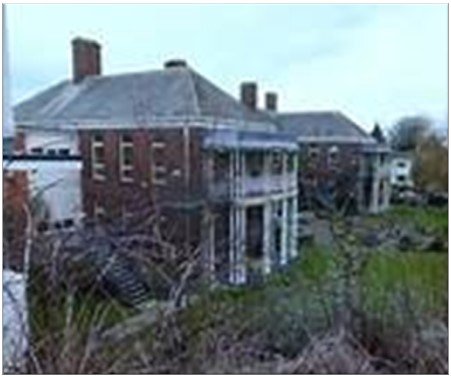 In the early 1920s the Committee of the Cottage Hospital was anxious to replace it with a temporary building which could serve until such time as sufficient money was available to embark on a bigger project.

The Committee approached Sidney and he did a lot of work in finding the site, designing and getting prices for temporary buildings for twelve beds.    However the resultant prices were high, such that the Committee got cold feet and suggested a competition of local Architects to design a completely new hospital. They asked Sidney to advise them. In doing so he informed them of the need to comply with the RIBA competition conditions, which required the appointment of an independent assessor.  Consequently the Committee appointed Mr Worthington of Manchester, who, at the time, had one of the largest architectural practices in the country.  Many of the Committee were Manchester businessmen who, when they had amassed sufficient money, decided, and without consulting the committee, to ask Mr Worthington to get on with it.  Sidney, one of the newest members of the RIBA, heard about this and, needless to say, was very upset.  So he sent a masterly letter to Mr Worthington, one of the RIBA’s most senior members, reminding him that the Committee had sought his (Sidney’s) advice, and that he had advised them to proceed in accordance with the RIBA conditions.  It was under these Mr Worthington had been appointed as assessor and, as such and being a member of the RIBA he could not also act as Architect.  Unsurprisingly, Mr Worthington did not take kindly to this upstart but duly resigned his position.

Sometime previously, Sidney, knowing there was going to be a competition, sent to the RIBA for all the latest books on hospital design. He was sent a number of books but immediately sent all the ones on British hospitals back saying they were all out of date.  However he kept the American ones and taking heed of their latest designs, subsequently incorporating them into his own work.

It was a very big job.  No fewer than 34 contractors tendered from all over the country, with tenders ranging from £28,800 to £34,945. The builder appointed was Joseph Davies of Birkenhead and the final cost was £24,525.

The foundation stone was laid by Lord Colwyn on June 23rd 1923 and the 50 bed hospital was formally opened on October 17th 1925.  The plans and designs of the new hospital were reported at the time as a lasting tribute to the artistic conception and skill of the architect.

The completion of the Hospital marked a turning point in the Client-Architect relationship.  Instead of the Architect presenting the person who opened the hospital with a suitably engraved momento, the Management Committee reversed this by presenting a two-chime engraved carriage clock to the Architect, with their grateful thanks.

Since its original construction the Hospital has been the subject of a number of additions and alterations, both internally and externally.

The plan of the hospital is basically a square U shape with two cross wings running parallel to Hesketh Road.  This is best seen from Hesketh Road looking toward the south elevation facing the garden.  It is also possible to see part of this elevation from the car park off Bryn Avenue.

The hospital is two storeys, plus a basement, with hipped slate roofs and buff ridge tiles and prominent chimneys.  A decorative dental course runs below the gutters.  The walls (and chimneys) are of a red-brown brick and, as with other buildings designed by Sidney Colwyn Foulkes, are laid in “Flemish bond”.  ( a 17th century bond which show, in every course, “stretchers” and “headers” alternatively.  Stretchers and headers are the long and end faces of bricks).

The original windows have been replaced.  Details of the original fenestration are described below.  The main emphasis of the description relates to the remarkable south elevation and the two cross wings with their two storey verandahs which provide a shaded place from which to enjoy a shaded and structured from which to enjoy the garden and recouperate. 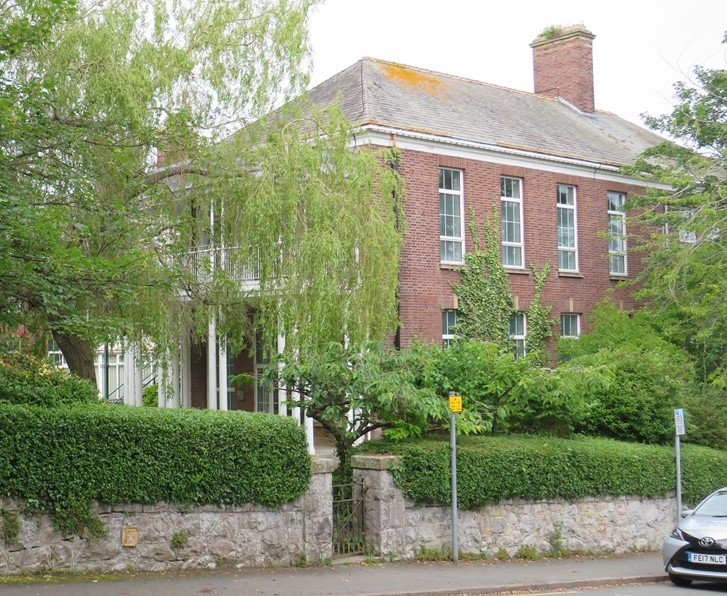 The columns supporting the verandahs on both levels are arranged as sets of three in the corners with pairs in between and in pairs at the junction with the ends of the wings .The columns at the ground floor level have a greater diameter than those at first floor level. Other pleasing features of the verandahs are the highly curved fronts and the decoration on the wide fascias.

Old photographs indicate that there were three glazed doors opening out onto the first floor verandah and one on the ground floor, the latter being flanked by a tall window at each side extending close to the floor.

The recessed centre on the south elevation, between the cross wings and facing the garden is of very pleasing symmetrical design and proportions.  On the first floor there are seven windows, with the two outer ones wider than the five in between.  The original first floor fenestration consisted of six panels with vertically sliding box sash windows and eight panes over eight panes over the two outer sash windows.

Below the five central widows on the first floor there were five doors opening out onto the garden, each door opening consisting of a pair of glazed doors, each having six panels with a wide solid panel beneath four panes of glass.  The glazing above this in the space under the semi-circular arch door opening was especially pleasing with arched glazing bars in the form of s fanlight.  At ground level the two outer windows flanking the five doors were like the windows above – eight pane over eight pane sash windows.

The inner elevations of the cross wings facing the garden have three windows on each floor originally with tall elegant sash windows.  The Hesketh Road elevation is now somewhat obscured by vegetation and large trees growing between the stone boundary wall and the Hospital building. The original drawings show some basement windows at the northern, lower, end of the Hesketh Road side.  The entrance to the hospital from Hesketh Road is set back and consists of three semi-circular arches supported by columns with capitals.

It will be noted that the heads of the window openings are in soldier course brickwork (bricks laid on end) on the first floor and on the ground floor in the form of a shallow segmental arch with keystones.  (a keystone is the central wedge shaped arch stone at the crown of an arch, put in last). 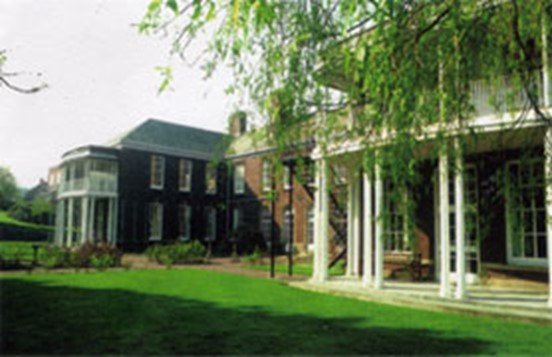 Walking higher up Hesketh Road enables one to appreciate the design of the formal gardens. This delightful space consists of lawns, paths, planting and seating. A pedestrian gate leads into the garden from the pavement. The gardens are an important part of the hospital, being overlooked from the wards providing a pleasing outlook for both staff and patients and as somewhere to make the most of warm, sunny days.  A stone wall marks the boundary of the garden.  A well vegetated bank rises up behind the garden.  The presence of so much vegetation including a large evergreen tree detracts somewhat from the architecture, having a shading effect and is in marked contrast to an old photograph showing a much more open outlook.  Nevertheless, and more importantly, it provides a more attractive setting for the hospital staff and particularly for the beneficial recovery of the patients.

The internal designs from America departed from the longstanding Florence Nightingale ward layout, which had sluice rooms at the ends of the wards.  Instead the new approach was for them to be they were located on the opposite side of the corridor in a central position, thus greatly reducing walking distances, along with providing more privacy and less noise to the wards.  Colwyn Bay is believed to have been the first in the United Kingdom to adopt such a layout.

Consequently the Colwyn Bay Community Hospital is a building of special interest in terms of its plan form and internal layout along with its, design, and delightful detailing. It is yet another example of Sidney Colwyn Foulkes’ work and the contribution he made to the town.

A comprehensive and very interesting account of this hospital may be found in the publications by Gwenda M Matthews:-

The first book includes coverage of the events leading to the appointment of Sidney Colwyn Foulkes as architect, the building of the hospital and the contractors who carried out the work.

Anyone interested in learning about the hospital would do well to consult these books as well as studying the drawings of the proposed hospital which is reproduced on page 126 of “The Spirit of Colwyn Bay – The 20th Century in Photographs” by Eunice Roberts and Helen Morley.

Much of the above is based on the information in these books and grateful acknowledgement is made in this regard.  The comments and descriptions mainly relate to the hospital as it was originally and largely remains so today.

We are the Colwyn Bay Heritage Group. Our aim is to make the heritage and history of the Colwyn Bay easily accessible and better known amongst those who live here or are  interested in understanding … END_OF_DOCUMENT_TOKEN_TO_BE_REPLACED