Born in Paris in 1819, Jules Prudence Riviere began his life long musical career as a choir boy in France before going on to establish himself as a phenomenal French composer. In 1857 the French Emperor and Empress presented him with a commemorative signet ring commending his astonishing orchestral performance of which they had just witnessed (The Musical Times and Singing Class Circular, 1901, p.123).

The success he experienced in France led him to the UK where he sought after an international reputation.

On arriving in England in 1857 Jules Riviere almost instantly established a name for himself. With performances at the Adelphi and Alhambra Theatres, Cremorne Gardens and the Covent Garden Promenade Concerts he not only demonstrated his musical talent but also good showmanship, which audiences immediately warmed to (Scowcroft, n.d.).

In 1865 Riviere went into partnership with William H. Hawkes, a well known publisher at the time. Together they produced, imported and distributed a whole host of musical instruments. Although the extent to which Riviere had an input into designing the instruments is not known, the instruments produced by the company were not only of very high quality but also made using characteristically French traditions. 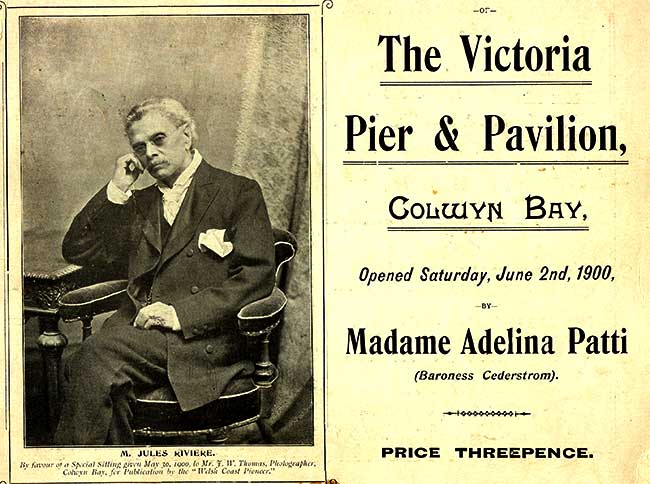 It was in 1887 when Jules Prudence Riviere acted as musical director at Llandudno Pier Pavilion; during this time he pioneered the launch of the seaside promenade concert (Theatres Online, n.d). The concerts were so popular that rather than been held at the pier-head, as they usually would have done, the pier pavilion was used instead (Scott, 2009).

After establishing himself in Llandudno, Riviere had developed a forty-two piece orchestra who played regularly at the Pier Pavilion and were received as a massive success (Roberts, Morley, 2002, p.12).

In the early years of Riviere’s residence in Llandudno he built a good reputation. However, in the later years of his time in the town he had fallen out with the pier management; this combined with the lure of a new pier over the Little Orme proved irresistible.

In 1900 the Victoria Pier in Colwyn Bay reached completion with a pavilion able to accommodate 2,500 people. Jules Riviere and his orchestra were secured to perform for the opening season of the pier. At the official opening on June 2nd 1900 Jules Riviere orchestrated a phenomenal concert which featured the critically acclaimed Madame Adelina Maria Clorinda Patti (Roberts, Morley, 2002, p.9).

On moving to Colwyn Bay, Riviere’s took with him the name of his Llandudno Home: Bod Alaw, translating to ‘musical place’. However his residence in the town was sadly short lived as on December 26, 1900 Jules Prudence Riviere passed away, aged 81 (The Musical Times and Singing Class Circular, 1901, p.123). He can be found buried at Llandrillo yn Rhos Churchyard.

Though Riviere spent a comparably short time with the Colwyn Bay Pier Company he was well received and had a big impact on the success of the Pavilion and the town. As a result of his achievements in Colwyn Bay Jules Prudence Riviere’s legacy lives on.

Subsequent to his death, the street which he had lived for just 7 months was changed to ‘Riviere’s Avenue’ in honour of his contribution to Colwyn Bay. On St. David’s day, 1950, ‘Bod Alaw’ primary school opened to the public in what was Riviere’s home. Today, the school has relocated to Abergele Road, opposite Parc Eirias (Colwyn Bay p.211).

We are the Colwyn Bay Heritage Group. Our aim is to make the heritage and history of the Colwyn Bay easily accessible and better known amongst those who live here or are  interested in understanding … END_OF_DOCUMENT_TOKEN_TO_BE_REPLACED