Summary: The area of open space on the south side of Penrhyn Avenue which now includes Colwyn Bay Cricket Club and the Rhos Park Bowling Club was once part of the Cayley Estate, named after the Cayley family, well known landowners in North Wales.

Location: On the south side of Penrhyn Avenue, Rhos-on-Sea.

The area of open space on the south side of Penrhyn Avenue which now includes Colwyn Bay Cricket Club and the Rhos Park Bowling Club was once part of the Cayley Estate, named after the Cayley family, well known landowners in North Wales. In the late nineteenth century on dates we have been unable to determine parcels of the land were sold to William Horton a local businessman.

William Horton had purchased the Rhos-on-Sea Pier in 1896 when the original development company collapsed just a year after it was opened. He set up The Colwyn Bay and Liverpool Steamship Company and established a regular ferry service along the North Wales coast. We know he had plans to develop Rhos-on-Sea as a high class holiday resort and assume the land he purchased was part of his overall vision.

Further pieces of the Cayley Estate and pieces of William Horton’s land were sold or given for housing development (e.g. the Elwy Road Estate), for the building of new roads and for recreational purposes – a cricket club, a bowling club, and for children’s playground during the early part of the 20th century. 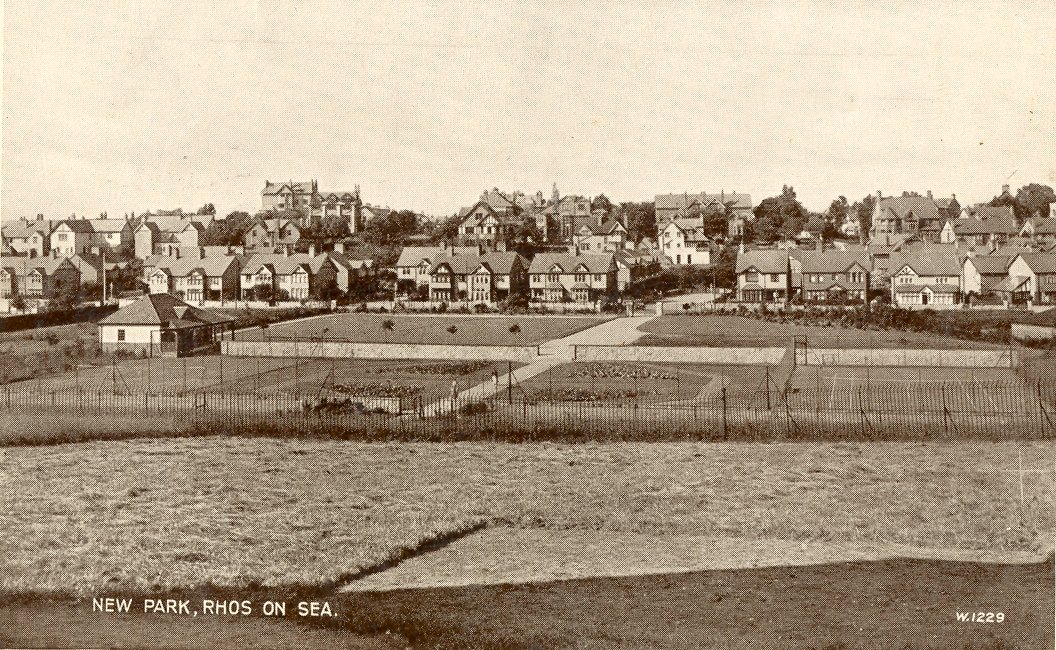 We can trace some of these developments through the Colwyn Bay council’s minute books and other publications but again, we have few details of when land was exchanged and for what price if any.

The following list shows the information we have been able to find:

1918, June – a proposal is put to then Colwyn Bay Urban District Council for the development of a recreation area to include a large boating lake, tennis courts, bowling greens and croquet pitches. The total area proposed for the development was five and three quarter acres, of which two belonged to William Horton, the remainder to the Cayley Estate. William Horton was willing to let the council have his land for a nominal rent on a long lease, on condition that the Cayley Estate agreed to the same condition. The Council agreed to contact a Mr. R. E. Birch, the agent for the Cayley Estate, about this.

1918, October – costs submitted to a council sub-committee for the re-laying of a bowling green and tennis courts.

1919, March – terms for the leasing of land from the Cayley Estate for 21yrs at £3.00 per acre for use as allotments were proposed, subject to 6 months notice if the land was required for other development purposes.

1921, December – William Horton agrees to give land to the council for recreational purposes if it is to become part of the wider plan proposed in June 1918.

1924, May – the Colwyn Bay Cricket Club ground and pavilion were opened and the first match played, between Denbighshire and Caernarvonshire. The first ball was bowled by the late Lord Colwyn ‘a generous benefactor to the club’. The club was founded in September, 1923.

“The early pioneers were greatly helped by local land owners who donated much of the land for the club to develop. Sir Kenelm Cayley presented 2004yds of land. Mr William Horton 1750 yds, bordering Penrhyn Road and Mr John Newton of Newton Estates 1350 yds, to enable the ground to form a complete square. Wooler and Son, Builders, erected the pavilion at net cost. In December 1925 Thomas Emery, Builders valued the land at six shillings per square yard and the pavilion at £1325.” From Colwyn Bay Cricket Club: a Club History by G. E. Mellor.

1927, March – Cayley Estates offer to sell the ‘Recreation Ground at Rhos’ – the block of land extending from Church Road to, and including, Rhos Road and the Rhos Road allotments – for £8,737, with conditions. The council refer the
proposal to the relevant sub-committee.

1935, Autumn – the remaining Cayley Estate land is put up for sale. 177 acres is bought by Victor Wilde from ‘Strangecliffe’, Brompton Avenue, a cotton and agricultural engineer and President of Rhos Golf Club.

1938, April – the Council refuses Victor Wilde’s offer of land between Elwy Road and Church Road, adjacent to ‘The Rhos Recreation Ground’, by one vote , as the costs were too high.

1938, May – refusal offer rescinded by the council and a proposal made that the land be developed as a 9 hole golf course to offset the ongoing cost. The gift of land from Victor Wilde was acknowledged.

1939, March – the council still unsure about the purchase of the land.

1939, April – the council reverses it’s decision to purchase the land and seeks ways to raise the £1097 needed to meet Victor Wilde’s conditions.

1939, October – reported that a loan had been received to enable land adjacent to Elwy Road to be purchased and for work to proceed.

1940, January – Ratepayers Association thank the council for the improving the entrance to the recreation ground from Elwy Road. (Would this be for gates for which ornate stone pillars remain, matching those on Penrhyn
Avenue?).

1940, June – agreed that more of the recreation ground be used for allotments, as part of the ‘war effort’.

1949, August – the council agrees to purchase land from the estate of William Horton on a 999-year lease from December1929 (ground rent £50 p.a.) for perpetual use as a recreation area.

I am indebted to Darlah Thomas for most of the information provided for this report and acknowledge her painstaking research. We, Darlah and I, acknowledge that the chain of events is incomplete and that the snippets we do have sometimes raise more questions than answers. However the report shows just how often pieces of land are exchanged and how the intended use is shaped and moulded over the years to be something very different.

Having said this, and interestingly, William Horton’s overall vision for Rhos-on-Sea to become a high class holiday resort has come largely to fruition. The ‘open spaces’ he purchased for recreational purchases one hundred years ago are perhaps being used in a more limited way than he envisaged but the land is still being used being used for recreation today. Rhos Recreation Ground has a well established cricket club, a bowling green, tennis courts, children’s play equipment and two contained football / basketball areas, to say nothing of the flower bedded parkland for both residents and visitors to enjoy.

Acknowledgements: my thanks to Tom Birchall, former President of Colwyn Bay Cricket Club, for informing me about the Cricket Club and again thanks to Darlah Thomas for generously sharing the results of her research.

We are the Colwyn Bay Heritage Group. Our aim is to make the heritage and history of the Colwyn Bay easily accessible and better known amongst those who live here or are  interested in understanding … END_OF_DOCUMENT_TOKEN_TO_BE_REPLACED