The Colwyn Bay Timeline is on ongoing project and we’ll be adding to it in the future. Let us know if you notice any important omissions and we’ll add them.

The entire timeline is very long and may load slowly on some connections. If that is the case you may find it helpful to filter the posts by the categories below – it’s also a quick way to select a particular period of time. Just select the time period you want to view and press the Filter Timeline button.

In 60 or 61 AD the Romans invaded North Wales under the command of the governor, Suetonius Paullinus, with 12,000 men to attack Anglesey – the stronghold of the druids and centre of resistance to the Romans Read more

In 61 AD a Roman army is traditionally believed to have been ambushed at Nant Sepyr (the pass beneath Bryn Euryn), and its second in command (Sempronius) killed in the fighting. Read more.

Cynlas the Red at Bryn Euryn

Excavations have proved that this hilltop was the site of a Romano-British hil fort.  This was built in the 5th or 6th century by one of the local “kings” who sprang up after the Romans left, probably Cynlas the Red. Read more.

Reign of Llywelyn the Great

There was a medieval fishing weir near Rhos point, some remains of which can still be detected at low tide.  It is thought that this was built by the  monks from the great Cistercian monastery of Aberconwy.  Read more

Conquest of Wales by King Edward I

Conquest of Wales by King Edward I. Conwy Castle built 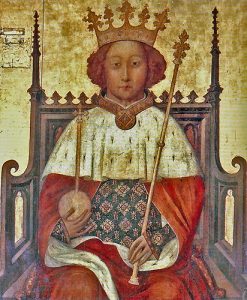 First reference to a stagecoach

First reference to a stagecoach travelling along the Old Highway

Turnpike Road made through the district

Thomas Telford is consulted on main roads and highways along coast

Llandrillo and Abergele Branch of the Bible Society formed

Eirias Bridge constructed and the road to Mochdre made

Improvements to the Holyhead Road

Thomas Telford completes his improvements to the Holyhead Road

Chester and Bangor Stage Coach first going through. Mail coach leaves Holyhead 5 p.m. spending the night at Bangor, and arriving at the Feathers Inn, Chester at 4 p.m. (Travelling at 8 miles an hour). “Hark-Forward” coach running from

About this date the Afon Ganol marsh was drained

London to Holyhead by coach now took only 27 hours. By 1837 the coaches “Queen of Trumps” and “Lord Dinorben” run through Colwyn.

Chester to Bangor railway opened for passengers. Construction had begun in 1845 Read more

A record catch of herrings at Rhos Weir

A record catch of 35,000 herrings at Rhos Weir Read more

Pwllycrochan opened as a hotel

Rev. W. Venables Williams appointed to the living of Llandrillo

Agitators throw the Toll Gates into the sea

Building of the Promenade

Original Ship Inn demolished and rebuilt across the road from its original position near the Church, by Whitehall Dod

April 13th Colwyn and Colwyn Bay Local Board formed – a Local Board of 12 members – constituted, by Order of Local Government Board, No. 21442, dated April 13th.

Station Road is laid out

Subway and approaches to the beach completed

Building of the Quaker Meeting House The Colwyn Bay and Colwyn Urban District Act authorised the construction of a Promenade and new Sewage Works. Read more

The Rhos Neigr sinks off Rhos on Sea

August First aircraft landed in Wales, on the sea shore at Rhos-on-Sea. Robert Loraine in a Farman biplane

Sale of the Cayley Estate

Sale of the Cayley Estate

April 14th. Local man Harold Lowe was the fifth officer on the Titanic when it sank.

English Baptist Church on Hawarden Road opened. Intention was to build a church and a church hall, only the hall was built at that time. Read more

First Methodist services in Rhos-on-Sea held in the Playhouse, then a theatre and cinema (now Co-op Store)

Erection of Workmen’s Dwellings at Rhos

May Llandudno-Colwyn Bay through road opened for traffic

Amalgamation of the Parish of Llysfaen

April 1st Amalgamation of the Parish of Llysfaen with the Urban District by virtue of the Counties of Caernarvon and Denbigh (Llysfaen) Order 1922; and increase of members of the council from 24 to 28

Spitfire “Borough of Colwyn Bay” crashed before having seen active service. Given its name to mark the townspeople’s war effort through National Savings investment

It became legal to serve alcoholic drinks on Sundays

Opening of the Welsh Mountain Zoo

Visit of Her Majesty the Queen

Visit of Her Majesty the Queen

Llanddulas landfill site opened by the Secretary of State for Wales

Opening of the A55 Expressway

Opening of the Colwyn Bay section of the A55 Expressway

The Prince and Princess of Wales visit

Clock presented to the town

Final season of the miniature railway along the promenade. Read more

Christmas. The demolition of the government buildings on the corner of Conwy Road and Coed Pella Road is nearing completion. Read more

In 1898 the Council erected 24 lamps to illuminate the East Promenade, powered by a generating plant built in Ivy Street.  Electricity supply by the Council to private consumers commenced on 1 January 1900, and proved so successful that the

We are the Colwyn Bay Heritage Group. Our aim is to make the heritage and history of the Colwyn Bay easily accessible and better known amongst those who live here or are  interested in understanding … END_OF_DOCUMENT_TOKEN_TO_BE_REPLACED