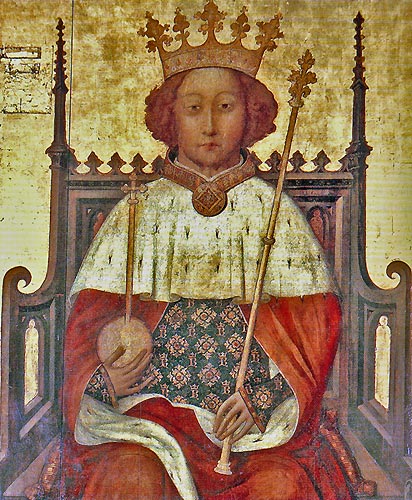 It is a remarkably little known fact that in the late Middle Ages, Colwyn Bay was the setting for an event of national importance in the history of England and Wales – the downfall of king Richard II.

In mid-August 1399 Richard II left Conwy castle with a small retinue, was ambushed at Penmaenhead, just east of Colwyn Bay, and then “escorted” to Flint castle by his captors.  He was then taken in stages to London, imprisoned in the Tower of London, and by September 29 he had been “persuaded” to renounce the throne.   A mere 14 days later, on October 13, Henry Bolingbroke was crowned king to become Henry IV , thus bringing to an end the direct  line of Plantagenet kings who had ruled England for over 250 years. Richard was imprisoned in the Lancastrian stronghold of Pontefract castle and within 4 months he had died, probably of starvation.  Even this was not the end of this dramatic story.  Henry Bolingbroke, Duke of Lancaster, who had deposed him to become Henry IV, had a distinctly shaky claim to the throne.  Consequently the foundations had also been set for the future Wars of the Roses as many years later the Yorkists were to decide that they had a better claim to the throne than the Lancastrian descendants of Henry IV and so initiated the bloody period of civil war now known as the War of the Roses. The ambush at Penmaenhead makes for an exciting and dramatic story in its own right.  However, from the above synopsis it can be seen that not only was it also the trigger for a series of dramatic events at the time but it also led to an important upheaval of great historical significance. Therefore it is surprising that this event is so little known locally.

Background to the ambush

Richard had experienced a turbulent and insecure reign, but ironically by 1399 he finally felt secure and decided to lead an expedition to Ireland to re-establish his authority there.  This proved to be a fatal error.  Henry Bolingbroke decided to take the opportunity to return from exile with some supporters, ostensibly to claim his inheritance as the rightful Duke of Lancaster.  News of his landing was sent to Richard in Ireland, and reached him within 6 days.  Clearly Richard needed to return to England quickly to rally his supporters and crush the incipient revolt before it gained momentum. However, for reasons which are still disputed by historians, he fatally delayed for nearly a fortnight before starting his return.  Some chroniclers state that just when his provisions and horses were loaded, he ordered them to be unloaded and taken to a different port, leading to a further critical 7 days delay.  Instead he sent the Earl of Salisbury to North Wales with a small retinue to raise an army, and probably to secure Chester.  Salisbury duly summoned the Welsh gentry and succeeded in getting an army together. Unfortunately this army became impatient waiting for Richard (and probably their promised payment).  Shakespeare captures their discontent in the following words: “My Lord of Salisbury, we have stay’d ten days, and hardly kept our countrymen together.  And yet we hear no tidings from the king; therefore we will disperse ourselves; farewell.”  Shakespeare has Salisbury pleading with them “Stay yet another day, thou trusty Welshmen; the King reposeth all his confidence in thee”, but to no avail. We are fortunate that there was a Frenchman in Salisbury’s retinue called Jean Creton, who later wrote a metrical record of the whole episode, thus giving us a contemporary account of all these events.  This broadly confirms Shakespeare’s version, albeit in more prosaic terms.  In his account Creton has the Welsh gentry saying “… the king is not here…..we believe that he is dead.  We will not fight for you.”   Consequently the fearful and demoralised army broke ranks.  Some went home and some defected. Eventually Richard finally landed, but far too late, in Milford Haven.  By this time his position was critically weak, as Bolingbroke had attracted increasing support.  In desperation Richard fled with only 15 followers and made his way north, eventually arriving at Conwy where he bottled himself up in Conwy castle, which was one of the strongest castles in the country and virtually impregnable.

Creton was present in Conwy to see the arrival of the demoralised king.  In recounting the first encounter of the Earl of Salisbury and King Richard, he describes them both as being “tearful and emotional.”   He continues “Truly it was a piteous sight to behold their looks and countenance.”  It does not appear that Richard was in a right emotional condition to play the role of a wise statesman, which may partially explain the catastrophe which followed, leading to his capture, overthrow and subsequent death/murder. Bolingbroke had reached Chester with his forces when he heard of Richard’s arrival in Conwy.  He sent the Duke of Northumberland on ahead with a detachment of troops.  When he reached Penmaenhead (just east of present day Colwyn Bay) Northumberland left the bulk of his retinue behind as this was the ideal site for an ambush. Although Penmaenhead is still a very prominent headland, it is difficult now to visualise now what an obstacle it presented in the Middle Ages. Some of the headland has since been quarried away, but in those days the headland reached all the way to the seashore and was extremely difficult to cross. Having thus set the scene for the ambush, Northumberland proceeded with a small retinue to Conwy, where he appears to have assured Richard that Bolingbroke simply wanted his grievances remedied, and had no designs on the throne.  Richard was also promised that he would be able “to save his dignity”  After several days considering these terms, Richard accepted them, but on condition that Northumberland swore on the host that he intended “no deceit”.  An arrangement was then made that Northumberland would go on ahead to prepare dinner at Rhuddlan, while Richard followed. Accordingly Richard set off with a small retinue of 23 followers.  However, when he reached Penmaenhead the trap was sprung, and Northumberland ambushed him with the main body of his troops, although again swearing on the host that no harm was intended to Richard.  Having no real choice in the matter, Richard then continued with Northumberland, effectively as his prisoner, until they reached Flint castle in the evening.  Shortly afterwards Bolingbroke arrived at Flint with his forces, and escorted Richard to Chester. From this point onwards Richard was treated much less deferentially and whatever Bolingbroke’s original intentions, he relatively quickly procured Richard’s abdication in London, and his own proclamation as king by a cooperative parliament.  Richard was subsequently removed to the remote security of Pontefract castle, a Lancastrian stronghold, where he mysteriously died, possibly from starvation.  Given that his continued existence would inevitably pose a threat to Bolingbroke (now Henry IV) and a potential focal point of discontent, Richard’s death does seem remarkably fortuitous from Henry’s point of view.  Given Richard’s erratic personality, it is possible that he fell into a depression, and stopped eating, but foul play seems a much more likely explanation of his death. This whole dramatic episode probably marks Colwyn Bay’s most dramatic entry onto the stage of Britain’s history, and has not been equalled since.  It is therefore surprising it is not better known locally – there is not even any commemorative display board at the site to mark this stirring and fateful event.