The Elwy Road Housing Estate in Rhos on Sea is one of Sidney Colwyn Foulkes’ main contributions to the development and architectural heritage of the town.  This estate is of particular significance, importance and interest.

Before examining the layout of the estate, its design and architectural detail it is useful to have an understanding of the development of the principles of housing estate layout earlier in the 20th century and considering how these ideas may have influenced the Elwy Road Housing Estate.

Readers who are interested in learning more of housing layouts are referred to “Homes, Towns and Traffic” by John Tetlow and Anthony Goss, (1968) from which much of the following introductory comments are taken and are acknowledged.  This book gives an excellent description of what has become known of the “Radburn principles” of housing development from the planning of Radburn, New Jersey in the USA in the 1930s.  However it is not known whether, or how much, Sidney Colwyn Foulkes was influenced by the Radburn idea when preparing the layout and design of the Elwy Road Housing Estate.

Whilst the development in Radburn was considerably larger than the estate at Rhos on Sea there are a number of themes developed in the planning of Radburn that may be found in the Elwy Road estate.  The book says that “The traditional grid iron pattern of (American) streets, all equally attractive to through traffic was abandoned and a number of new elements introduced.  A logical system of specialized one purpose roads was devised – arterial roads linking with the surrounding area, main town roads, main estate roads and service roads for houses.  The main estate roads enclosed “superblocks” – areas of 30-50 acres within which were the houses and the culs de sac which served them.  Large areas of open space left in the centre of the providing a backbone of continuous park, towards which the houses faced  and through which ran footpaths, underpasses and footbridges across trafficked roads linking the ‘superblocks’ together.  This was, in fact, to be complete segregation between the pedestrian and the motor car.”

Whilst Radburn was never completed due to the ‘Great Depression’ of the 1930s “Those who live in Radburn, and have lived there for any length of time, find it has served its objective of making home and community life more reposeful, pleasant and safe – and particularly safe for children” (C Stein “Towards New Town in America).

Thus the essential principles of the Radburn ideas were achieved in the part that was built and proved to be a great success.  The results were the absence of through traffic, safe walks, houses facing onto gardens and parks and an awareness of neighbours.

Tetlow and Goss comment that “in Britain the Radburn idea was comparatively slow to make a start after the war. It first made its main appearance in Wrexham in 1950 in a scheme prepared by Gordon Stephenson.”  However it was subsequently widely adopted in the development of Britain’s “New Towns” in the 1950s and 1960s, and was associated with the celebrated 1963 report “Traffic in Towns” by Professor Sir Colin Buchanan.  The key principle was pedestrian/vehicular separation with a hierarchy of roads, primary roads linking settlements, district distributors serving local areas, local distributors serving neighbourhood areas and culs-de-sacs providing access to and within individual groups of houses.  A separate pedestrian network is to be integrated into this, using underpasses to cross district distributor roads and thereby keeping vehicles and pedestrians safely apart.

Following the end of the Second World War there was a shortage of housing and at the end of the 1940s Colwyn Bay Borough Council’s housing waiting list stood at more than 1,000.  The Council was keen to build house to meet this need and to this end and, in addition to other sites, the Council purchased 18 acres of land at Elwy Road from Mr Victor Wilde.  This was to be where the largest of the housing developments was to be built.  No doubt influenced by his successful housing estate work on Anglesey, Sidney Colwyn Foulkes was selected by the Council to undertake the design of the estate.

The estate layout is clearly shown on the larger scale Ordnance Survey (OS) maps and there is an interesting and clear aerial photograph of the (partially completed) estate on page 66 of “The Spirit of Colwyn Bay” by Eunice Roberts and Helen Morley.  The caption below the photograph states “The Elwy Road Housing Estate, built in the late 1950s covers 18½ acres. Designed by Sidney Colwyn Foulkes F.R.I.B.A. when completed it comprised 144 three bedroomed houses, 4 four bedroomed houses, 30 one bedroomed  and 60 two bedroomed flats.”

The map and aerial photograph show the road network, principally Bryn Eglwys (which runs from the top end Church Road to Elwy Road) and Bryn Menai (which runs up from Eglwys Road to join Bryn Eglwys opposite the block of flats.  There is one cul-de-sac – Llwyn Onn at the eastern part of the estate, not far from the junction of Bryn Eglwys and Elwy Road. 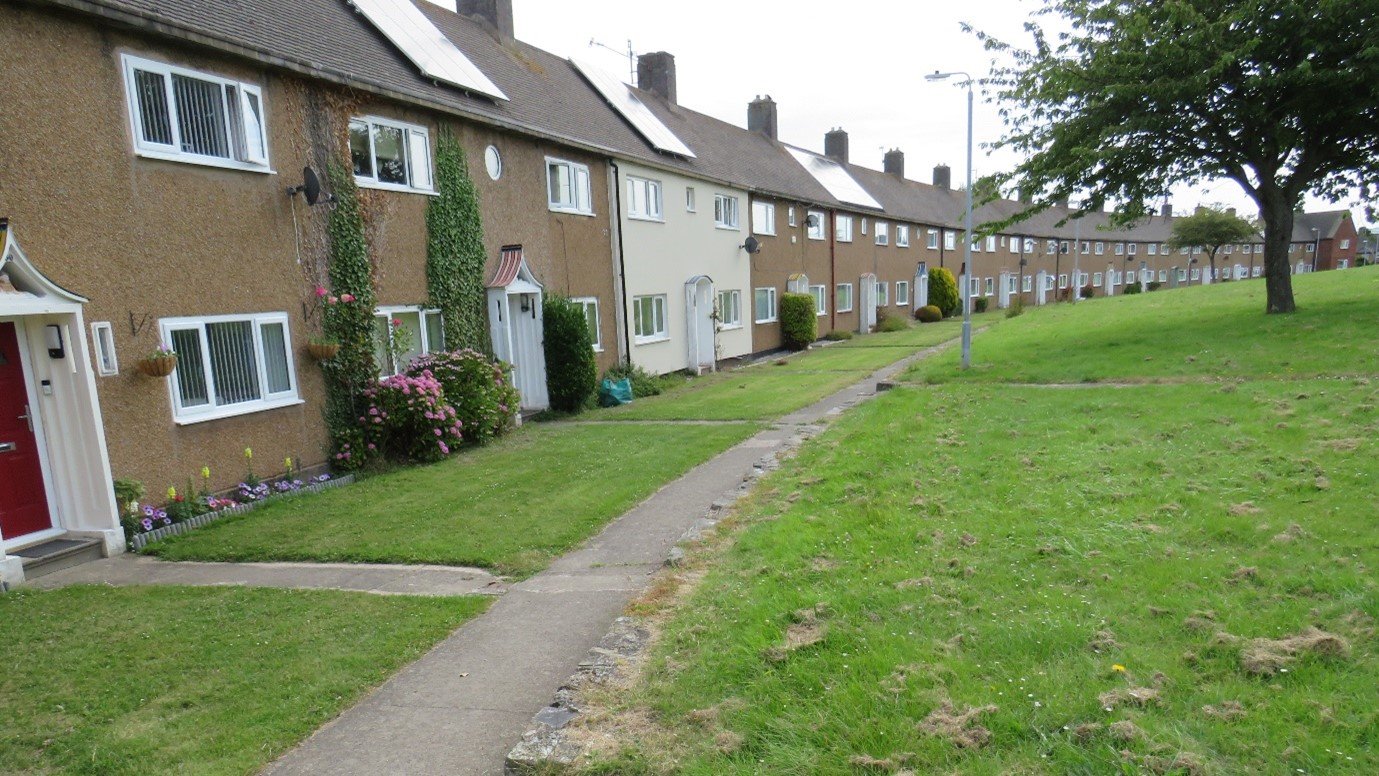 In general terms the estate is a mix of two storey houses, mainly in terrace form, semi-detached and a few detached houses, with three storey blocks of flats. There are no bungalows. The flats are located the top end of the estate, looking down Bryn Menai and at the northerly end fronting Elwy Road.

Separation of vehicles and pedestrians is also evident by looking at the design and layout at the front of the houses where footpaths run parallel to the houses with each house having its own path to the front door.

Reference has already been made to the Radburn principles with regard to service roads.  Study of an OS map and/or the aerial photograph, or a walk through the estate, will show the service road network running behind the terraces and houses giving access to the rear gardens for use by refuse and other service vehicles. 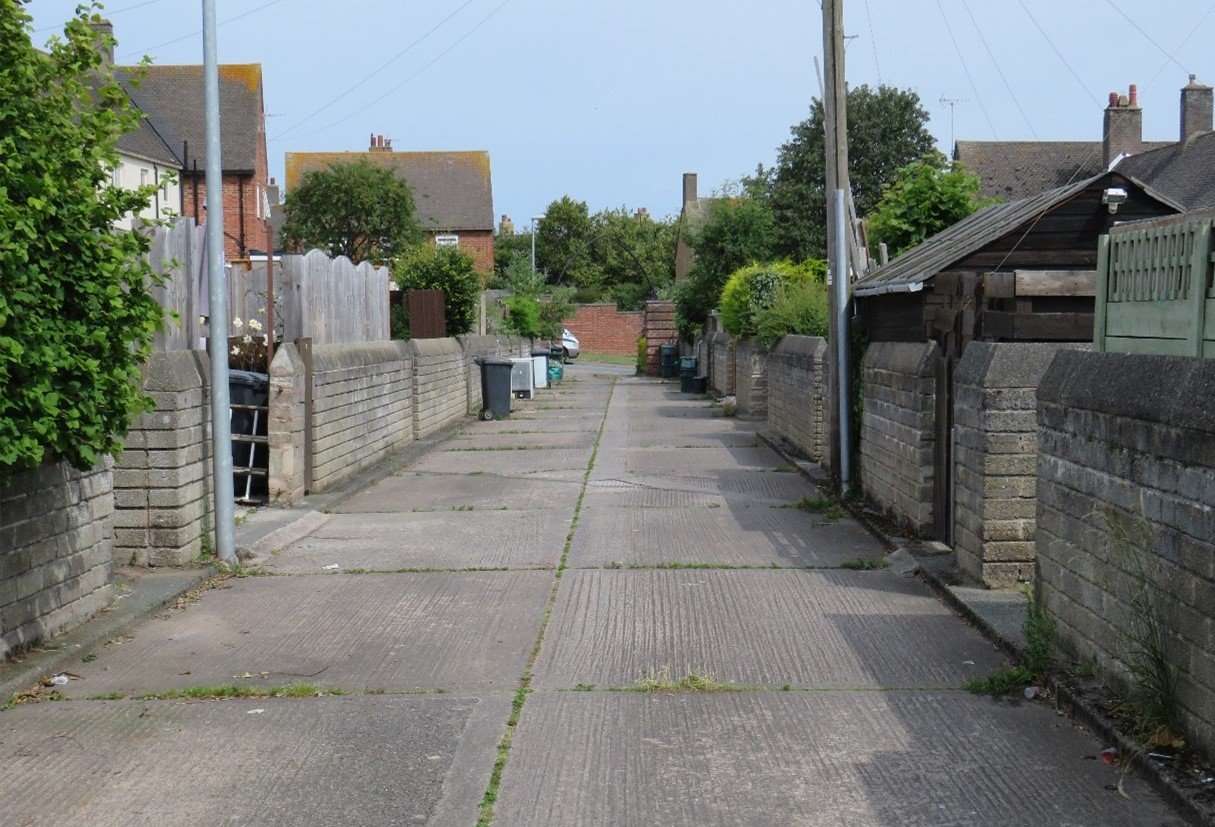 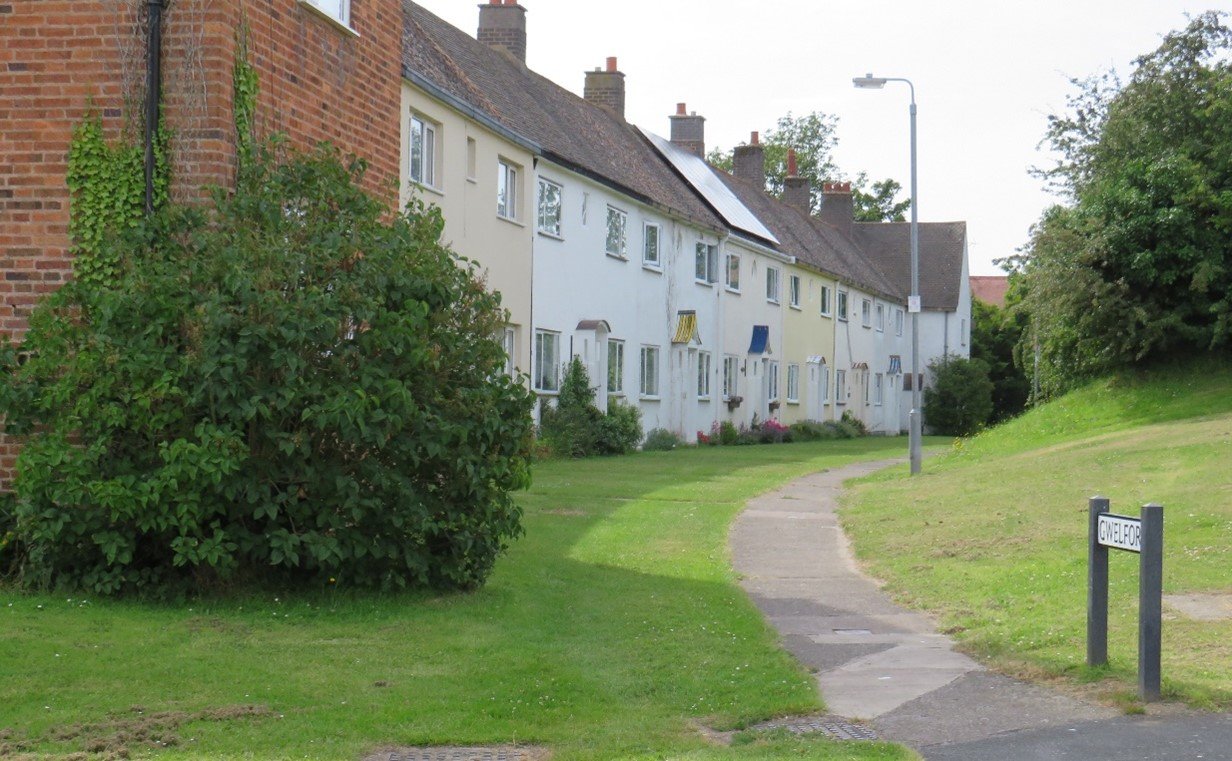 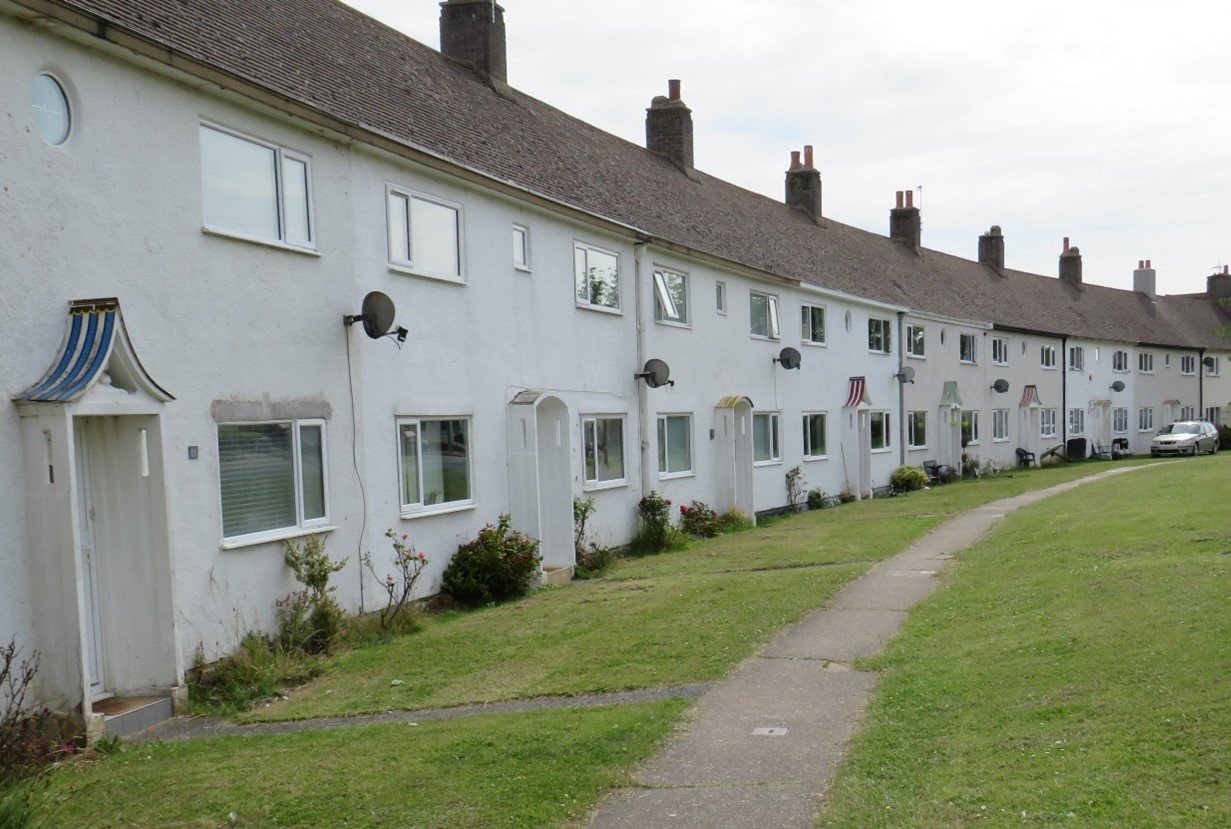 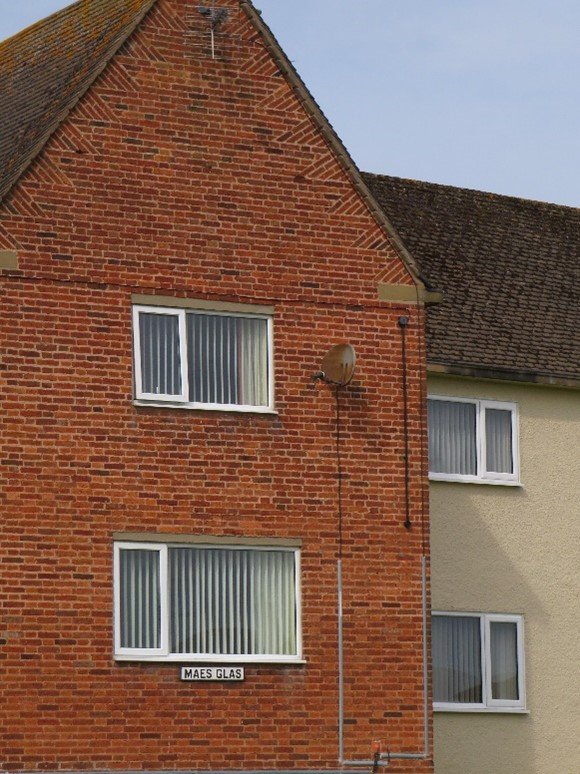 There is a feeling of spaciousness as one walks around the estate especially with the wide grassed open space between the long terraces on Maes Glas, and the lawns in front of the houses.  The back gardens, however are of limited size. 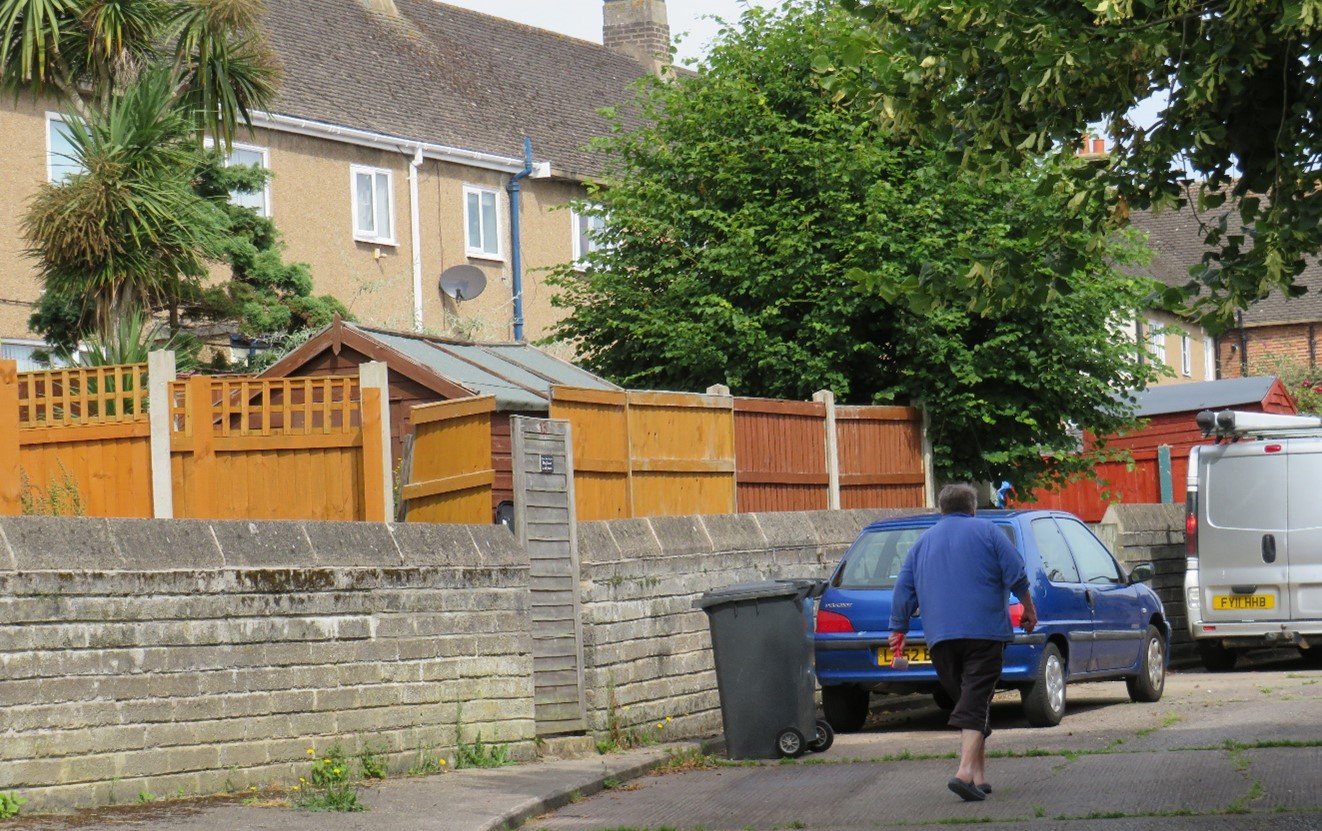 Generally the terraces and other houses follow the contours of the sloping site. In some terraces the ridge lines are of the same height and follow through, in other cases the ridge of each house rise from the adjoining property to accommodate the slope – seen for example on the terrace facing Llandudno Road. 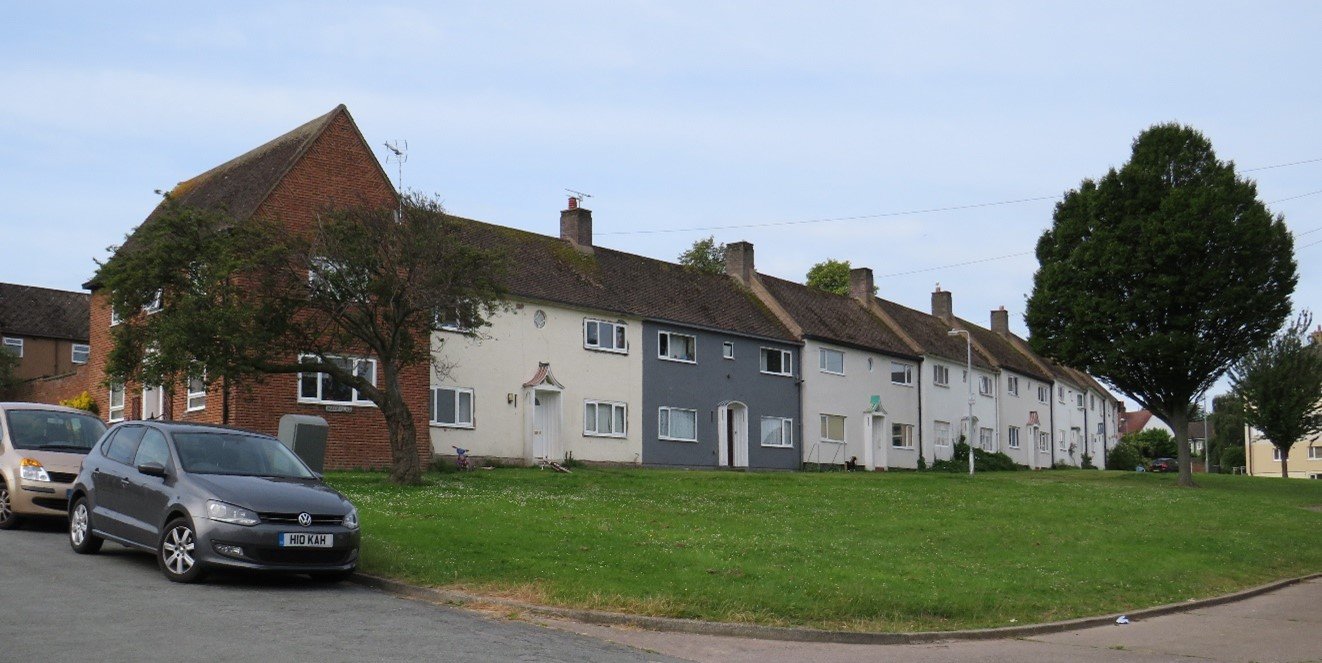 End of terrace house with rising ridge lines in terrace

Apart from the end of terrace houses, which are of brick, the houses are rendered.  The notes on page 66 of “The Spirit of Colwyn Bay” mention that different pastel shades in the Welsh tradition were originally used for each house.

It has been noted that the principle vehicular access is from Bryn Eglwys and Bryn Menai.  The approach to the estate from the top end of Church Road is especially pleasing with lawns in front of the two end of terrace houses and the mature trees.

Having considered the layout of the estate, the servicing and access arrangements etc, it is now appropriate to draw attention to the al-important architectural details.  Most of the observations on these architectural details refer to the brick end-of-terrace houses, but also relate to the other houses.

a) The brick end-of-terrace houses 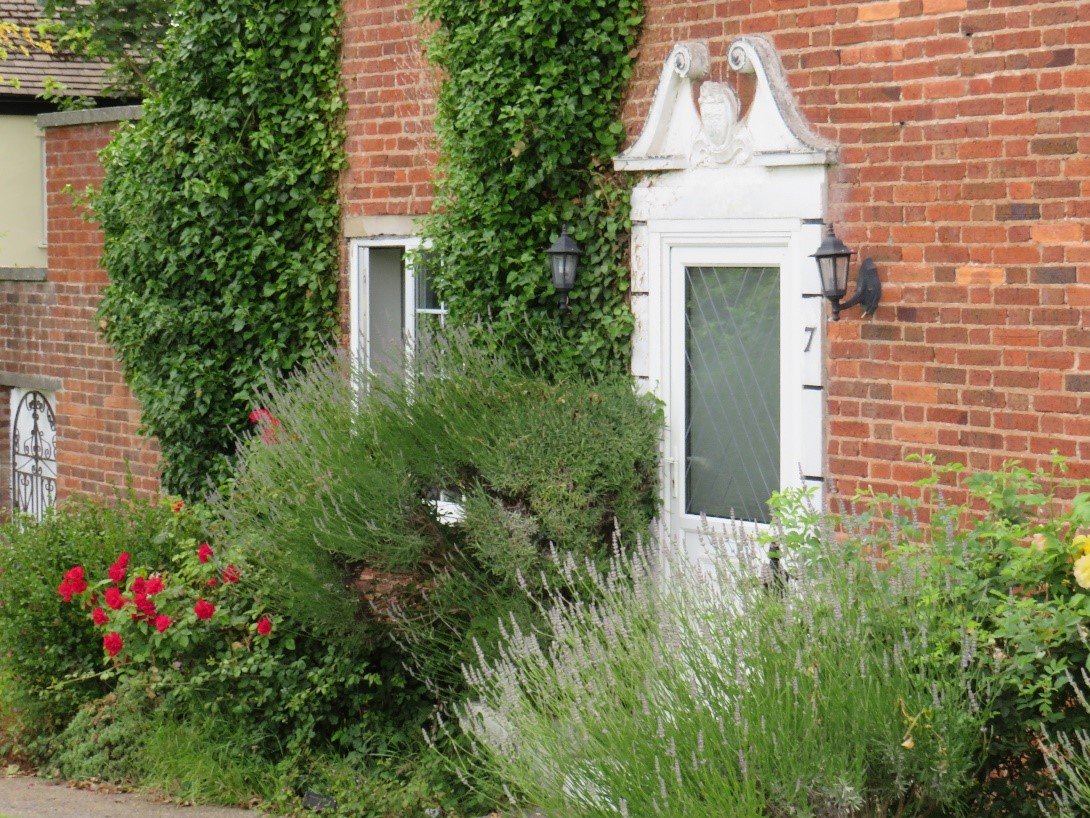 Doorway with pediment and crest above

b) The terrace, semi-detached and detached houses (not the brick ones) 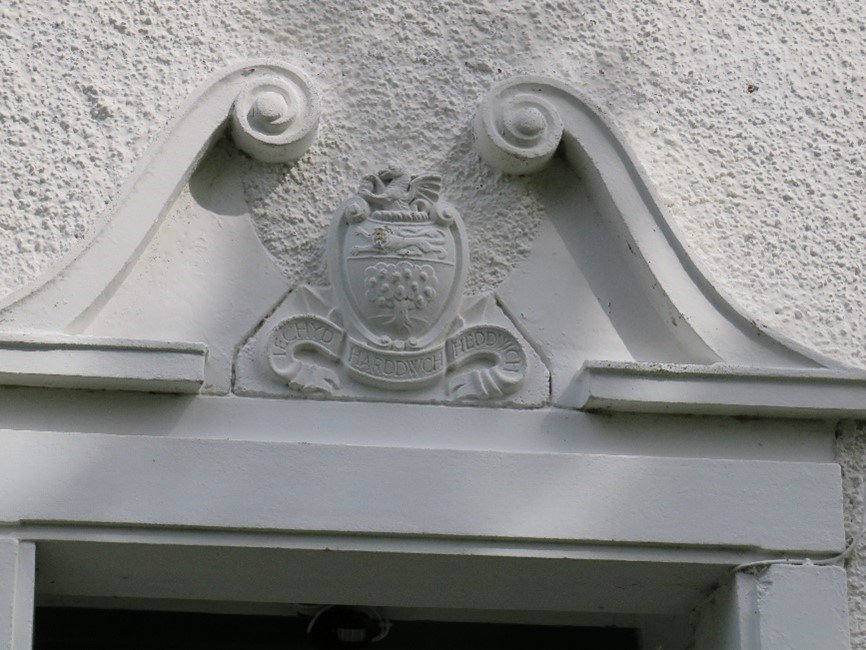 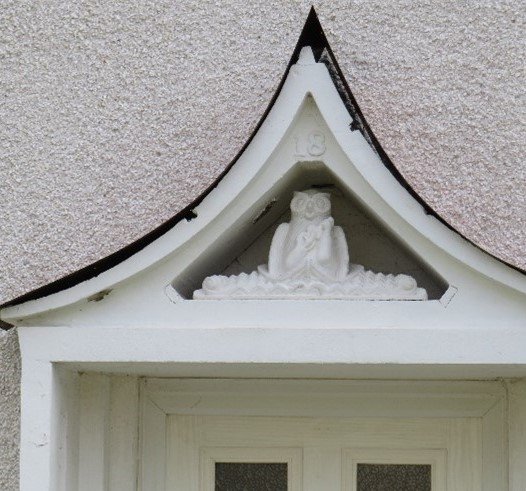 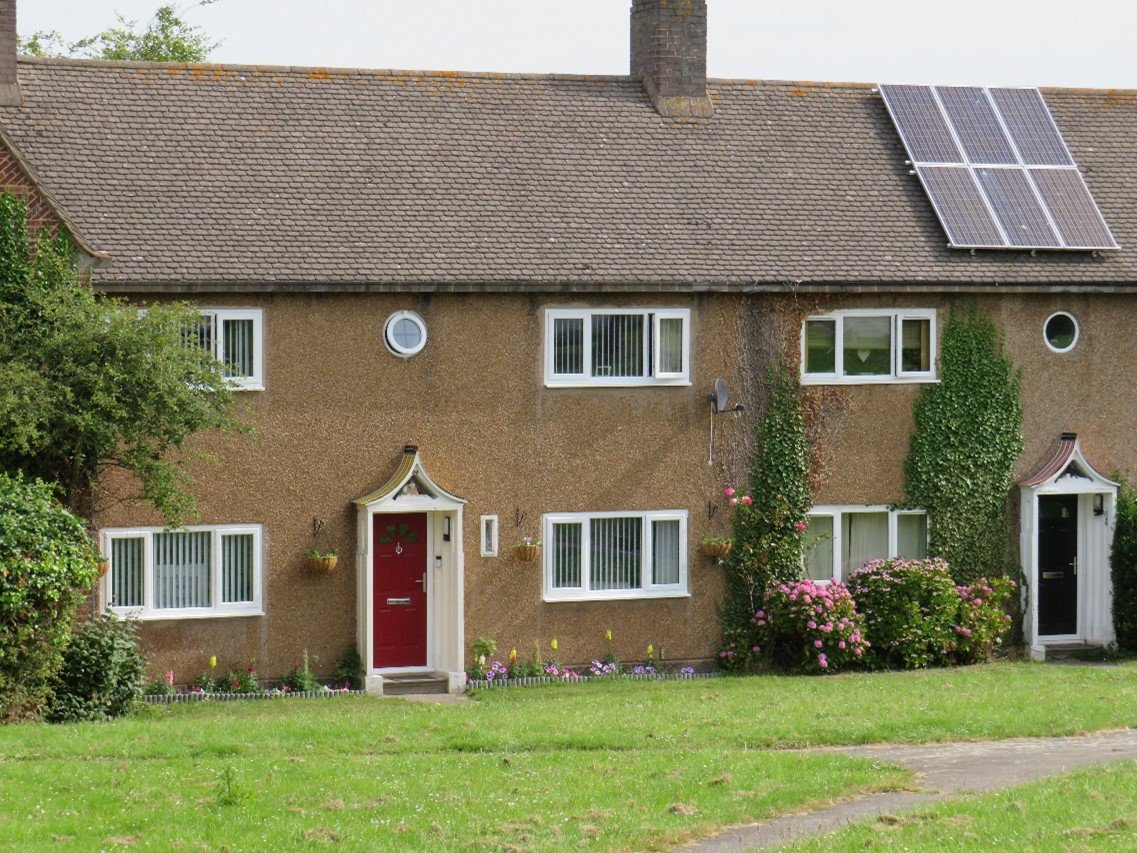 c) Entrance to the service roads 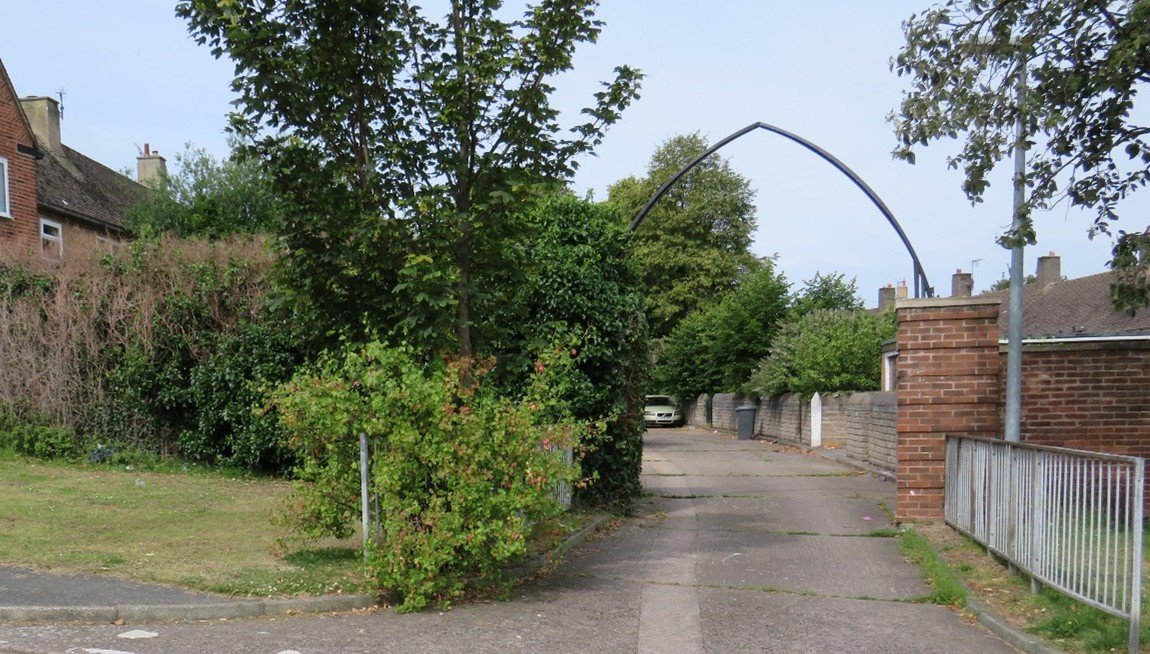 Entrance to service road with pillars and archway

·         The three storey blocks of flats facing Elwy Road have shared, recessed covered spaces on the first and second floors,  Although rather different, these are nevertheless reminiscent of those seen in the two storey units at Heaton Place.

In view of changes that have occurred since the estate was designed and built it may be appropriate to conclude with a few observations.

Whilst inevitable changes have occurred, such as the fitting of replacement doors and windows, solar panels, re-rendering etc. the original concept is still very clear and well worth studying by anyone interested in the work of SCF in particular and housing estate layout in the mid 20th century in general.

At the time of its design the extent of present day car ownership could not have been foreseen. The original layout made little provision for the parking of residents’ cars and the consequent effect that it has had on the service roads where cars are parked or, in one or two cases, back boundary walls removed to create private off street parking. Furthermore the size of service vehicles, particularly refuse vehicles has increased greatly such that access along the rear service roads is now more difficult.

Where there are mature trees and established landscaping, in the form of shrubs and bushes, these really enhance the open spaces.  Perhaps one cannot help but feel that the planting of ornamental or smaller native trees in the wide open spaces between the long terraces on Maes Glas would be well worthwhile.

Whilst not unduly shading the houses lower down the slope such planting unquestionably create smaller, more attractive and private spaces. Children’s play space could no doubt be incorporated into such a scheme of planting.  Although maintenance costs would undoubtedly be higher the improved environment would be well worthwhile.  Maybe such landscaping was proposed, and even planted, but have subsequently been lost, or removed to enable easier maintenance by ‘gang mowers’.  However the result has been the creation of a sterile and largely unusable open space which detracts from many of the attractive features of the estate.

In this series on the work of SCF references have been made to Edward Hubbard’s book “The Buildings of Wales – Clwyd (Denbighshire and Flintshire).  He has the following to say about the Elwy Road Housing Estate – “Finally, the Elwy Road Estate 1952-56, one of the best of Colwyn Foulkes’s many local authority housing schemes in Wales.  Two storey houses and three storey flats.  Vehicular service access is at the rear, and in some places there is pedestrian access at the front only, eg. in the broad and curving Maes Glas and part of Bryn Eglwys.  Walls are mostly rendered but the end blocks of terraces are of brick, with classical stone door cases.  Elsewhere are light-hearted porches with striped coloured canopies and further delicate touches are provided in glazing patterns.”

We are the Colwyn Bay Heritage Group. Our aim is to make the heritage and history of the Colwyn Bay easily accessible and better known amongst those who live here or are  interested in understanding … END_OF_DOCUMENT_TOKEN_TO_BE_REPLACED