Summary: Covering an area of approximately 16 ha. (40 ac.) Pwllychrochan Woods are a prominent feature on the steep, north facing slopes, above the central parts of Colwyn Bay. Originally part of the Pwllycrochan estate it came into public ownership in the early 20th century and has subsequently been used for informal public recreation. Due to its ecological value it is a designated Local Nature Reserve and is managed by a Council Countryside Warden.

Covering an area of approximately 16 ha. (40 ac.) Pwllychrochan Woods are a prominent feature on the steep, north facing slopes, above the central parts of Colwyn Bay. Surrounded on three sides by residential development, and divided into three by Kings Drive and the unmade Pen y Bryn Road, there is open access to its network of permissive footpaths.
The wood once formed part of the Pwllycrochan estate, which also included a mansion house and over 440ha. (1,100 ac.) of farmland. The former mansion is the large white building at the top of Pwllycrochan Avenue now part of Rydal-Penrhos School. There has been a succession of properties on the site from the late 17th century and the various owners have had much influence on the woods. 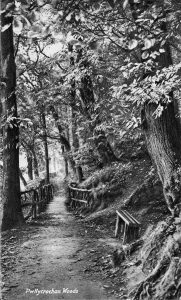 The most notable owners were Lord and Lady Erskine who moved into an earlier mansion after their marriage in 1821. The existing mansion was demolished and rebuilt along with the installation of footpaths and rustic greenwood bridges in the woods. In the early 1840s trees were planted, some exotic species such as sweet chestnut and douglas fir and the woodland extended westwards with the planting up of 6.5ha. (16ac.) of previously arable land. Various rhododendrons and snowberry were also planted for game cover and there is a record of a pheasantry, pointing to the woods being used for shooting. A number of full time woodsmen worked in the woods at this time.

The bulk of the Pwllycrochan estate was sold to John Pender in 1865 for £26,000, shortly after the Erskines family moved to live on their Scottish estate. Lord Erskine leased the mansion to his agent, John Porter, who turned it into a hotel in 1866, the first in Colwyn Bay. In 1875 the estate was subsequently sold to a syndicate of Manchester businessmen who then proceeded to carry out their intention of developing the town as a seaside resort.
The woodland as we see it now (16ha (40ac.)) was sold to the Urban District Council in two separate conveyances, 1905 and 1930, and has subsequently been managed for informal recreation. 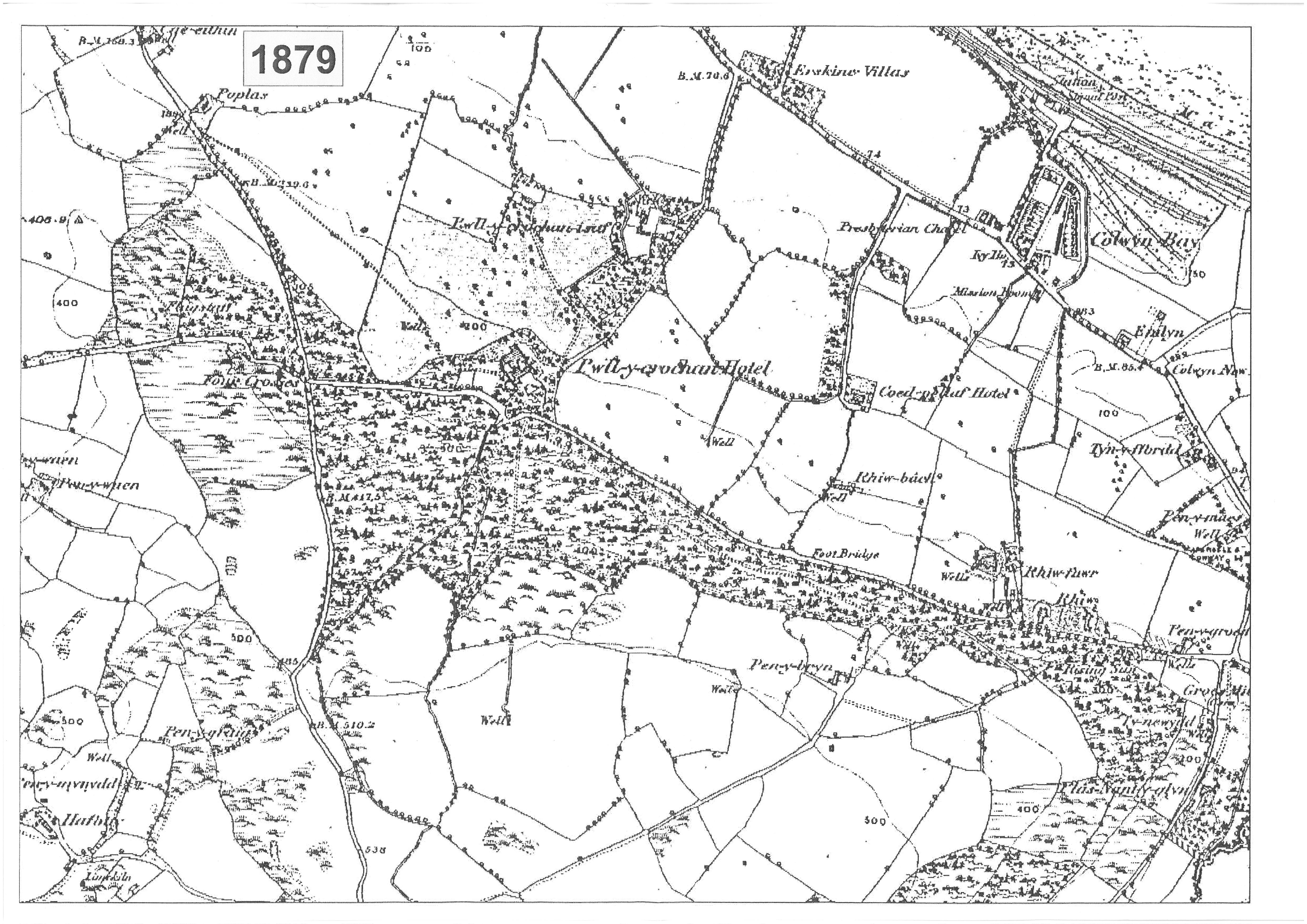 Pwllycrochan can be translated as: “Pwll” means pool and “Crochan” means cauldron ie. Cauldron pool. The name is thought to derive from the stream running down the steep dingle at the back of the mansion at a time when there was a much stronger flow of water – giving the effect of a boiling cauldron when it arrived at the bottom of the gorge.
Old Highway, the northern boundary of the woods, is thought by some to be an ancient British track later used by the Romans. It certainly existed prior to the C18th as a 1720 map clearly shows the road running from Groes Eirias to Conwy ferry. 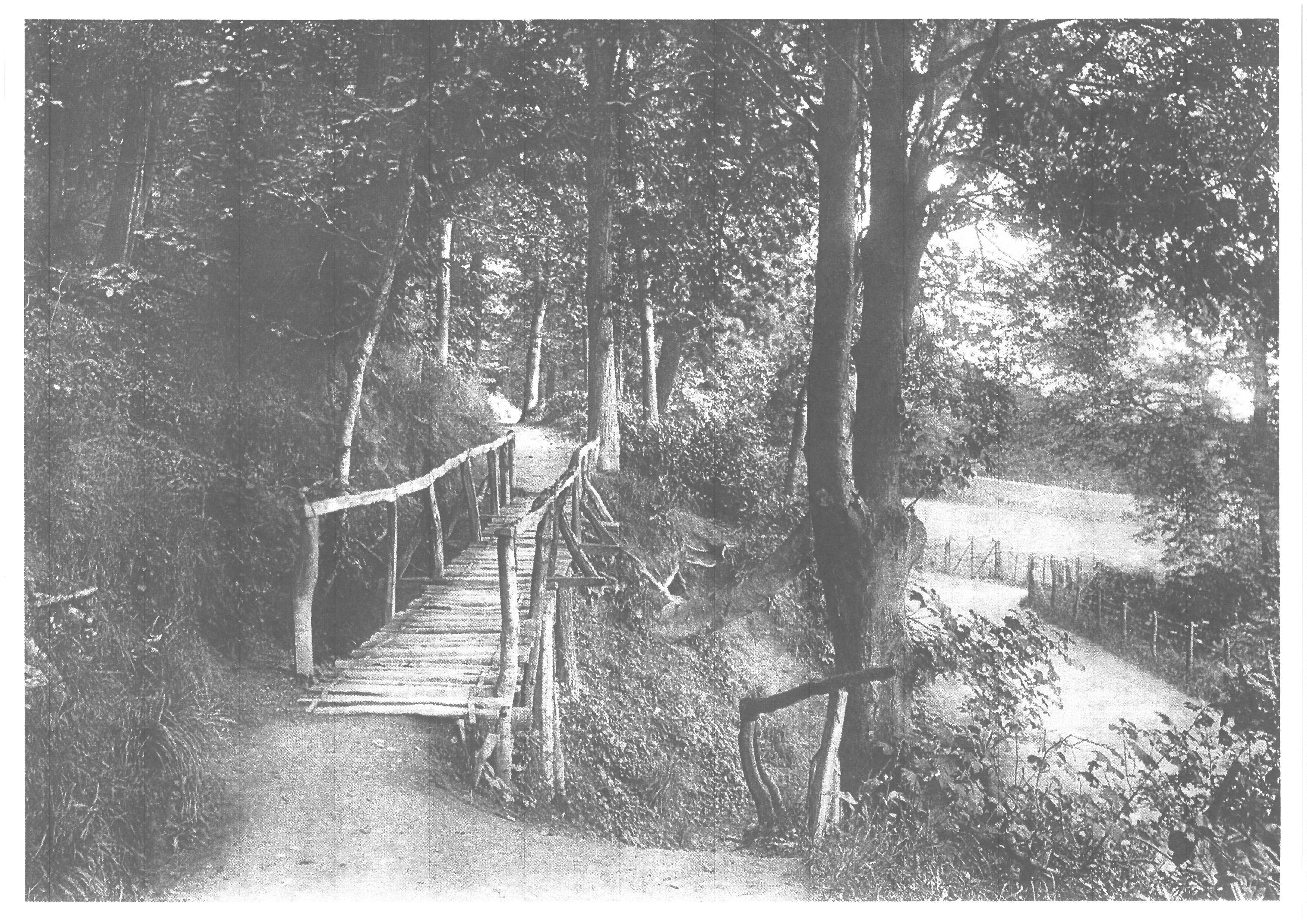 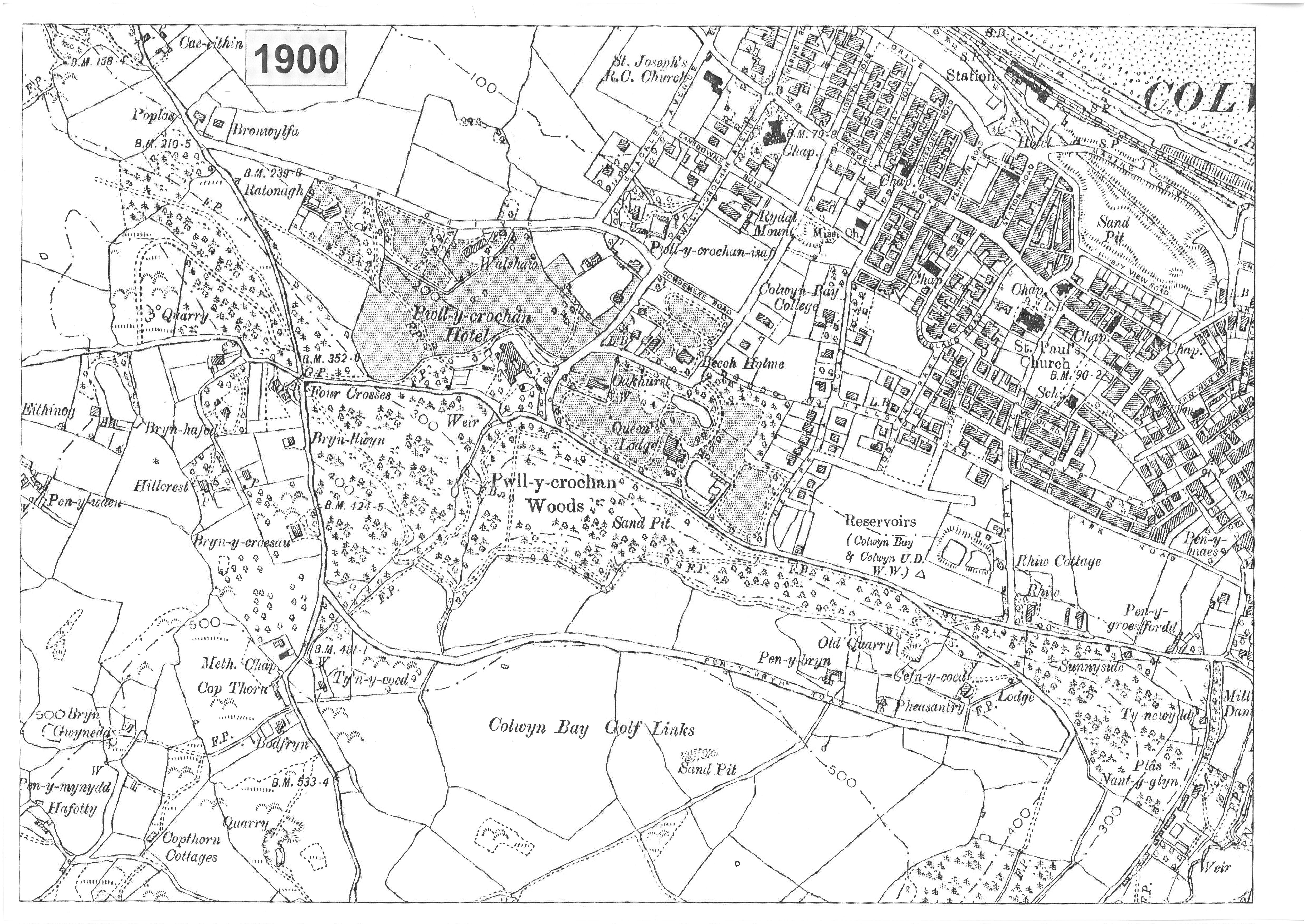 The bulk of the wood is ancient woodland, the definition of which is that it originated before the year 1600, and possesses at least 11 ancient woodland indicator species. The wood is almost entirely deciduous with a mixture of both native and exotic species. The dominant tree species include the common ash, sessile oak, sycamore, common beech, with horse chestnut, sweet chestnut and scots pine also present. There is an understorey of hazel, wych elm, holly and yew and ground flora consists mainly of bramble, ivy, honeysuckle-woodbine and dog’s mercury. 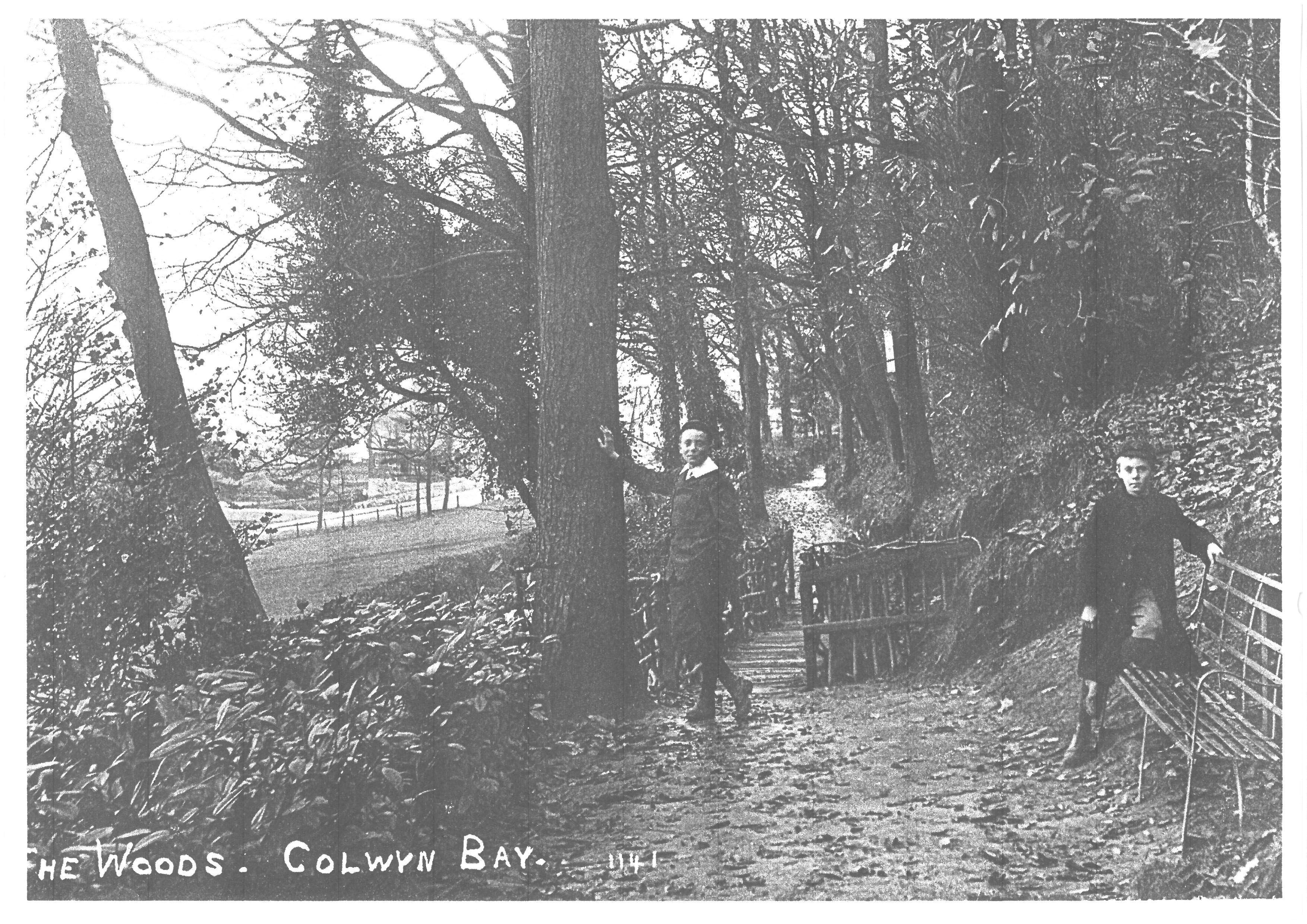 The woods has been managed by a Conwy CBC Countryside Warden since local government reorganisation in 1996, since when much management work has been undertaken. In particular, control has been established over the rhododendron and laurel the proliferation of which were preventing new tree growth by cutting out the light. Tree safety work has also been important with dead, dying and diseased trees regularly being felled and dangerous limbs pruned. Although considered “untidy” by some, deadwood is left standing for its habitat value. Other management has included footpath drainage and clearance, the provision of benches, and bird and bat boxes. Interpretation material has been produced along with entrance information boards and its use by educational groups is encouraged. The information boards also show the number of circular waymarked walks of varying lengths through the woods.

The woods were designated as a Local Nature Reserve in May 2000 and a Management Advisory Group has been established to assist in overseeing its management. Grant aid has enabled many of the major tasks to be undertaken, and whilst the major management work is carried out by contractors, much of the more routine maintenance work undertaken is carried out by the warden and volunteers.

We are the Colwyn Bay Heritage Group. Our aim is to make the heritage and history of the Colwyn Bay easily accessible and better known amongst those who live here or are  interested in understanding … END_OF_DOCUMENT_TOKEN_TO_BE_REPLACED