Postcode: LL29 7SU (places one in sight of the entrance) 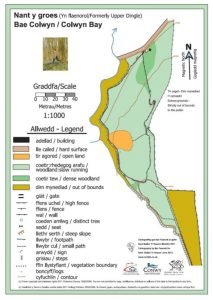 This small, broadleaved woodland is approached from the Old Highway near to its junction with Abergele Road.  Total area is about 1.5 hectares with a north-south site length of about 300 metres and average width 50 metres (as above).  It is classed as a semi-natural woodland, bounded on the west by the Nant y Groes or a tributary thereof and, on the east, by the Ysgol Bod Alaw site and a public footpath. The out of bounds area, on the eastern side, was planted with native tree species by Ysgol Bod Alaw pupils.The site was designated a Local Nature Reserve in 2007 and is currently managed by a Council Countryside Warden.  Maps from 1880 to 1948 indicate that the area was not wooded apart from adjacent to the Nant y Groes.  The woodland appears to have developed during the 1960s and 70s.  The maps indicate that open land in 1875 had a house, Barberry Hill, present by 1888, built on the site of the present Ysgol Bod Alaw and the layout suggests that the site was then part of the property’s surrounding land.  However, it is said that there has been public access since 1905.  In the mid-1980s, the then owner allowed the Young Ornithologists Club to manage it for its nature conservation and educational potential.  This was one aspect of management by various voluntary groups up to local government reorganisation in 1996.  However, there are no specific records of these activities.

Around the turn of the century paths were rather vague and, at the south end, merged into the Nant y Glyn valley of which it could be said to be the start.  However, there is no right of way and this is not now possible – there is a public footpath to Nant y Glyn on the other side of Ysgol Bod Alaw.

A circular route around the woodland was developed in 2006, funded by a Cydcoed grant (Reference 1).  The project included erecting safety fencing, seating, bins, bird/bat boxes, bird box web cam, site leaflet, school nature study equipment, woodland thinning and tree planting (to extend the woodland into an adjacent field).  The Ysgol Bod Alaw Parent Teacher Association, working with Conwy County Borough Council secured the funding and the children from Ysgol Bod Alaw were involved throughout the project.  In 2011 funding was received from Tidy Towns to create an orienteering trail.  The Orienteering Trail leaflet can be found here. The diagram above shows the current site layout and is taken from this leaflet.

The North Wales Wildlife Trust carried out a flora survey in August 1997 summarised thus (more detail in Reference 1).  ‘The main tree species include sycamore, sessile oak, ash, rowan and wych elm beside the riverbed.  Towards the edge of the wood silver birch and hazel is present.  The ground flora consists of field rose, common nettle, bramble, lords and ladies and ivy. Less common species include sanicle, enchanter’s nightshade, red campion and perennial rye grass.  Six ancient woodland indicator species were found at the time of survey and the wood was categorised under the National Vegetation Classification as an upland mixed ashwood (W9a).  The term upland mixed ashwood is used for woods on base-rich soils often found in the north and west of the UK (upland in the name reflects the abundance of this type of woodland on base-rich soils in upland Britain rather than to the altitude at which individual sites occur). There are several introduced species of an invasive nature-rhododendron and laurel -which are locally dominant in the shrub layer.’  In recent years there has been a significant reduction in the number of invasive rhododendron and laurel plants as a consequence of an annual spraying programme.

For fauna Reference 1 states: Despite the fact that the Young Ornithologists’ Club used the site during the mid-1980s, it has not been possible to find any records from this time, of bird life within the woods. Now the only records available are incidental sightings either from the warden, or reported to the warden. There is a small, but active and expanding badger sett within the woods. Badgers are also known to cross the woods to access two other, larger setts on adjacent land to either side of the woodland.

A leaflet is available here which provides a children’s trail with clues to wildlife.  In the leaflet, the area is still named as ‘Upper Dingle’).

We are the Colwyn Bay Heritage Group. Our aim is to make the heritage and history of the Colwyn Bay easily accessible and better known amongst those who live here or are  interested in understanding … END_OF_DOCUMENT_TOKEN_TO_BE_REPLACED