Summary: Brookfield Drive Sports pitches were donated to the community in the 1940s.  One of the fields is now the site of Colwyn Bay Rugby Club and the other two are used by Rhos United Football Club. 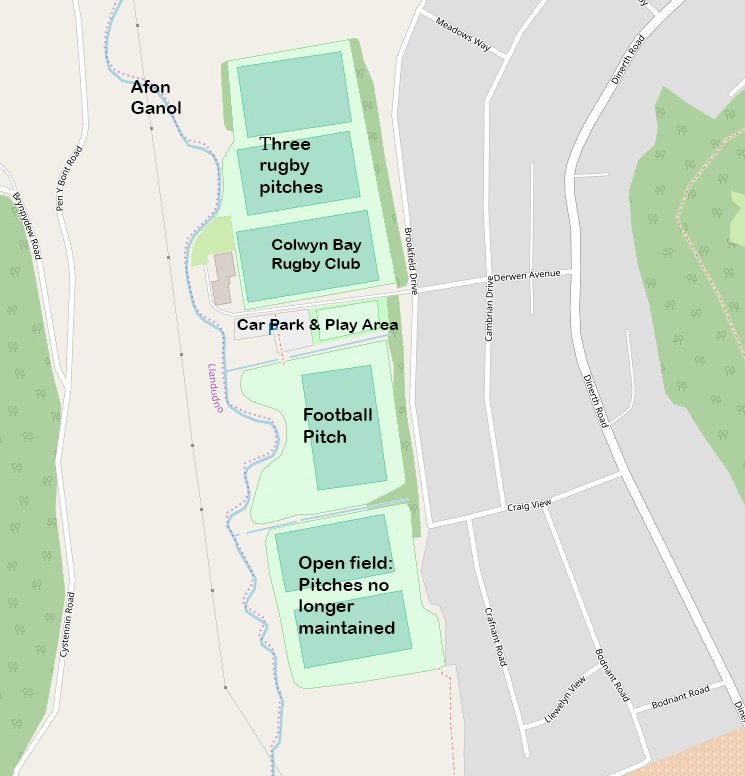 There are two public access fields bounded by Brookfield Drive, Colwyn Bay Rugby Club, the Afon Ganol and Quinton Hazell Enterprise Park.  Presently, each field has one football pitch; at one time both fields had two pitches.  Lately, there is rarely more than one pitch in use but a few years ago there was much activity often involving all the pitches.  The fields are used by Rhos United Football Club and player ages range from young children upwards.  To the occasional distress of players, there are deep and muddy ditches in which to lose carelessly kicked balls.

Three fields were given to the people of Colwyn Bay in the 1940s by Victor Wilde.  The nearest housing at the time was in Dinerth Road and access was by various footpaths.  Brookfield Drive appeared in 1967 completing the building up of the area between the fields and Dinerth Road.  Thus, there is now road access with an adjacent car park for about 20-25 cars.  The grass is cut and maintained by the Local Authority.  The most northerly of the fields is now the site of Colwyn Bay Rugby Club comprising 3 rugby pitches and a clubhouse.  The field adjacent to Colwyn Bay Rugby Club is well used but the southern field, which has no drains, is prone to flooding in heavy rain and, in winter, can be waterlogged for weeks at a time.

In the early days the fields were rather unused but in 1962, Rhos United Football Club was formed and has used the fields ever since.  Football pitches were laid out by the council.  In 1972, Colwyn Bay Rugby Club (founded 1922) was displaced from its site near to the present North Wales Police HQ and leased the North Field from the Local Authority so this part no longer has public access.  The loss of public access, contrary to the conditions of the gift, led to a stormy meeting of the Rhos Ratepayers Association.  Formally, the Rugby Club lease the two public fields from Conwy County Borough Council, but the authority looks after maintenance.  In the early 1970s the Local Authority provided a building with changing rooms and showers; prior to that the players changed on the pitch to the annoyance of some locals.  The changing rooms were destroyed in an arson attack in the early 1990s.  Rather than rebuild, the insurance money from the fire was given to the Rugby Club to redevelop their changing rooms on the understanding that these could be used by the footballers as required.  The space left by the lost changing rooms is now part of the Rugby Club car park, adjacent to the public car park. 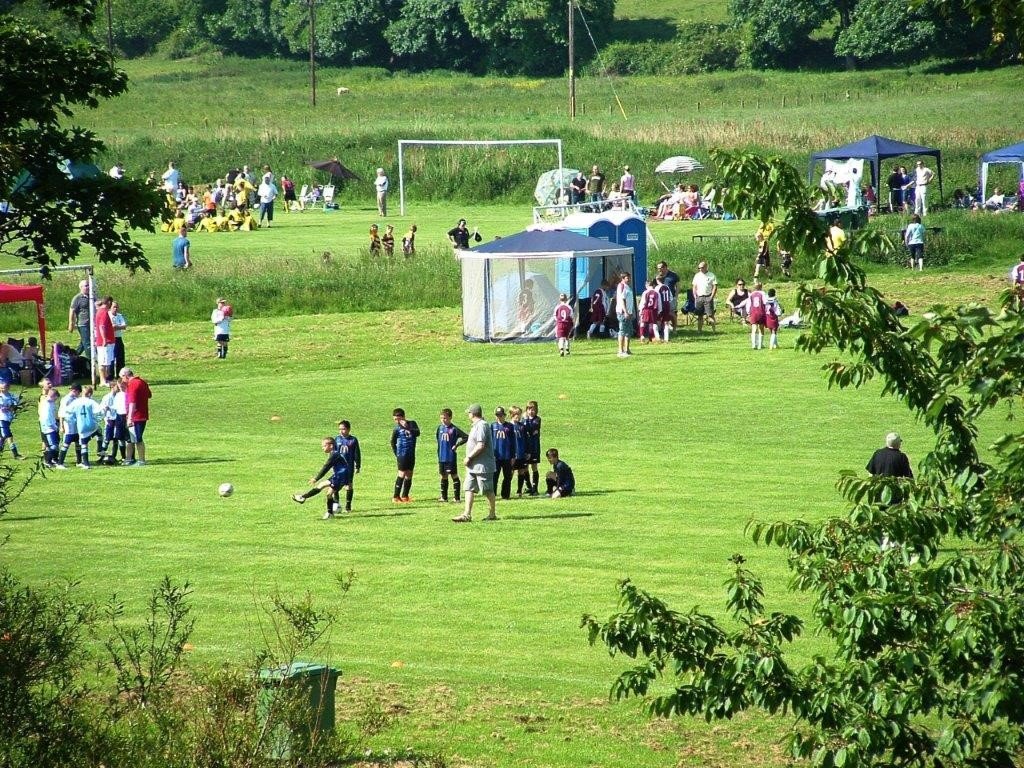 Until recently, there was an annual children’s football tournament held over a weekend.  Above is a view of the event from Brookfield Drive in 2011.  There is a small children’s play park beside the entrance road.  Local golfers and joggers often use the fields for practice and a footpath from Mochdre crosses the fields to provide a shortcut to Brookfield Drive and Rhos on Sea.

We are the Colwyn Bay Heritage Group. Our aim is to make the heritage and history of the Colwyn Bay easily accessible and better known amongst those who live here or are  interested in understanding … END_OF_DOCUMENT_TOKEN_TO_BE_REPLACED