Summary: Min y Don Park, then adjacent to Min y Don Hall, was officially opened as a public park in 1928. The 12 acre park was bought by the Council on condition that the local community raised £1,000 towards the cost.

As early as February 1924 Council Minutes record the existence of a Committee of Residents working with the Council to acquire the park. At that time they informed the Council that the Committee would be in a position to subscribe the sum of £1,000 towards the cost of purchase as required. Local events would be held to help raise that money.

“M. Porter & Co., estate agents, notified the Council, on behalf of the owner, that the purchase price had been arranged at £3,750. The Council resolved to proceed with the purchase and, as was the requirement at this time, made an application to the Ministry of Health for authorisation to borrow this amount – less the sum of £1,000 raised locally”.

The Minister of Health was satisfied with the proposed purchase of Min y Don Park but as the Council had also submitted an application to purchase Tan y Coed, to be considered at the same time, the final decision was delayed.

At the end of August, the required approval from the Ministry of Health, Whitehall, to take out the loan for Min y Don Park was received. The loan of £2,750 for the purchase of Min y Don Park was sanctioned for repayment over a period of 60 years. Instructions were given to the Council’s solicitors to proceed with the conveyance of the land and in October 1924 payment by cheque was authorised.

Councillor Bevan made reference to the contribution of £1,000 made by the inhabitants of Old Colwyn towards the cost of the acquisition, and moved that the Council “place on record the thanks due to the contributors and to those who had rendered such valuable service to the district in procuring the purchase of the property”. The motion was seconded by Councillor Dicken, and carried with acclamation.

Immediate instruction was given for the posting of a warning notice against damage being done to the trees in the park.

In September an application from the Old Colwyn Ladies Hockey Club was submitted, and it was agreed that the Club be permitted casual use of the ground, on payment in advance of a charge of 2/6d for each occasion. However, by December they no longer required the use of the park as they’d found a larger ground elsewhere.

The work soon began on preparing the park for public use. The first task to be undertaken was the placing of railings around the land. Wrought iron railings would be used to fence in the park at a cost of 13/6 per yard. The Council Finance Committee would again require approval for the loan of £497 to cover the outlay.

On the last day of 1924 the purchase of Min y Don Park was complete.

There now began the practical considerations. The Council was required to contribute to the cost of the newly laid sewer in Berthes Road. A proposal was received from the Trustees of the new Church adjoining the park regarding the boundary line, and suggesting an exchange of land at the rear of the Church for a strip of land of equal size on the north side of the Church premises. The expense of building the boundary wall and railing on the north side would be shared equally by the Council and the Trustees.

During early 1928, the bowling green, tennis court, pavilion, shelter and conveniences were planned. A putting green was also suggested and approved.

The 1937 Colwyn Bay Directory lists that a putting green, a bowling green, three hard tennis courts and a children’s playground are all available in Min y Don Park.

In April 2013 Min y Don Bowling Club celebrated the official opening of its new £52,000 clubhouse.  The new clubhouse was funded by a grant from offshore wind-power provider nPower Renewables and fundraising by the club.

In the 1820s Sir Richard Butler Clough, a wealthy merchant from Liverpool, came to live at Min y Don Hall nearby.  At that time the entrance to the hall was located where the United Reformed Church now stands. Sir Richard built a lodge on what is now the site of the Royal College of Nursing building on the edge of the Berthes Road car park. 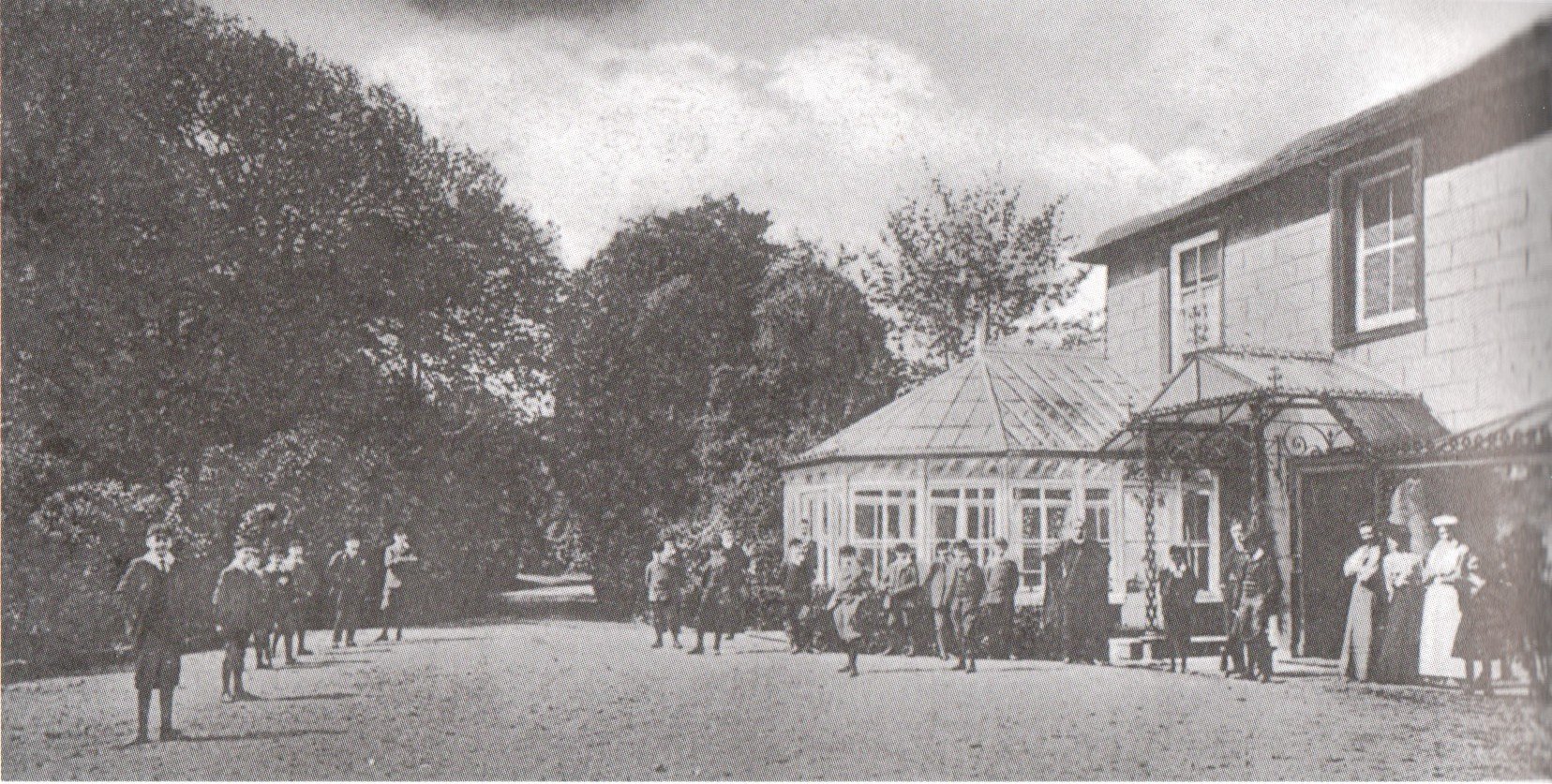 Early in the 20th century Min y Don Hall became Clive House Preparatory School for boys. Between 1919 and 1937 the school was renamed Min y Don and was run by Major Marle. The development of the park in 1928 prompted Major Marle to contact the Council about access to the Hall through the Park. The Council decided to point out there was no right of way reserved to Min-y-Don Hall across the land sold to the Council. The hall was sold to a local builder for housing development in 1937 and was demolished in 1938.

A plaque in the park notes the following information:

Each of the native trees planted in this woodland is a living memorial to residents of Old Colwyn who were killed during World War I (1914-18) or World War II (1939-45). Their names are recorded on the War Memorial at St. Catherine’s Church, Old Colwyn.

We are the Colwyn Bay Heritage Group. Our aim is to make the heritage and history of the Colwyn Bay easily accessible and better known amongst those who live here or are  interested in understanding … END_OF_DOCUMENT_TOKEN_TO_BE_REPLACED