Penrhos Road, Rhos on Sea, links the Promenade with Upper Promenade and is notable for the sharp left and right hand bends and the steep climb up from the Promenade.

Ridge Cottage stands above the road on the southerly side between the bends.  It is one of Sidney Colwyn Foulkes’ most delightful and pleasing houses and was designed as his own family home.   It has been awarded the status of a Grade II Historic Building.

SCF studied Town Planning and Civic Design at London University for a period before returning home after the First World War during which time he admired the Regency houses along the Thames  and it is thought that this inspired his design of Ridge Cottage..  He married in March 1918 and Ridge Cottage, was built in 1919 as his family home. It was their home with his three children until they moved to Moryn on Rhos Promenade in 1937. 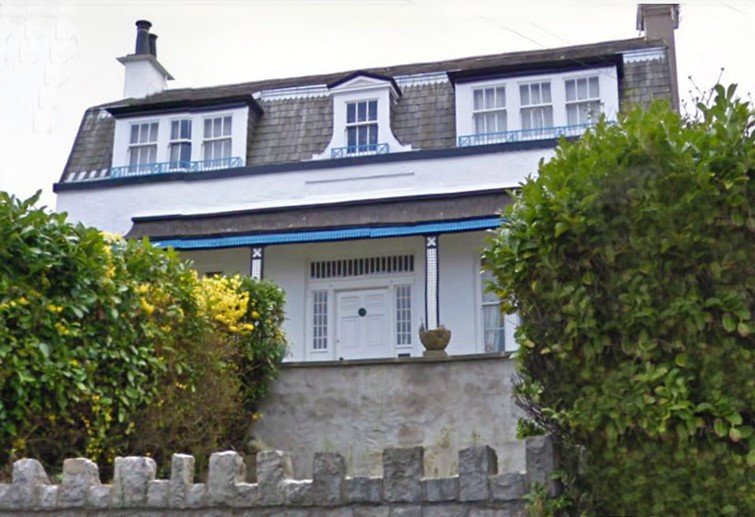 The garage stands underneath the front garden and is set in the high, limestone boundary wall, with the local “cock and hen” coping.

Most of the front elevation is visible from the road, apart from the lower part.   It is two storeyed (the upper storey almost entirely contained in the roof), with rendered elevations and chimneys at each end.   The Listing details refer to the building as “render over brick with a slate gambrel roof with end wall stacks”  (The Penguin Dictionary of Architecture describes a gambrel roof as one which terminates in a gablet at the ridge; in the United States a gambrel roof Is simply a mansard roof).

The design and detailing of the front elevation is particularly pleasing, forming a delightful composition.

Three dormer windows are set in the roof, the outer ones have three pane over three pane sash windows while the smaller, delightful, central dormer, also three panes over three panes is framed by wide architraves curved at the base.  These dormers all have low pale blue railings – the Listing details refer to these as “delicate wrought ironwork rails suggestive of scale down balconettes”.

A verandah runs nearly the full length of the front elevation.  The Listing details refer to it as follows: “A verandah with ogee leaded roof carried on slender square section columns (probably cast iron) spans the frontage.”

The front panelled door is centrally located and is flanked on either side by side lights consisting of 15 vertically proportioned small panes, three across, five down on each side.  Fanlight glazing extends across the full width of the doorway, ie across the door itself and the side lights.  Note that the fanlight glazing consists of narrow vertical panes.

The windows on the ground floor are also sash, either side of the front door, each arranged as a set of three, the central one consisting of three panes over three panes with the two outer panes being two panes over two panes.

The Listing details conclude by stating “ The house combines economical planning and construction with delicate and precise Neo Georgian detail, and is a remarkable example small house design for its date”.

We are the Colwyn Bay Heritage Group. Our aim is to make the heritage and history of the Colwyn Bay easily accessible and better known amongst those who live here or are  interested in understanding … END_OF_DOCUMENT_TOKEN_TO_BE_REPLACED