In 1912 Picture Playhouse (Rhos) Ltd was formed and the directors engaged Sidney Colwyn Foulkes to design a cinema to be built in Rhos which, at the time, had no cinema.  The choice of SCF may have been influenced by his previous work on the Cosy Cinema in Conway Road, Colwyn Bay. The resulting cinema was a long, narrow building with seating for 450 with, unusually, a musician’s gallery in front of the projection box.  The interior and foyer were panelled in wood and had an ornamented terracotta front.  The cinema opened in April 1914 and closed in 1974 on the retirement of the owner.

On Sunday evenings during the 1930s the building was used by George E. Mellor to make silent movies. He formed a group called Rhos Amateur Film Productions, with its own group of actors. He was the director and cameraman.   George Mellor was also a founder of Colwyn Bay Cricket Club and established a model railway company called GEM, from buildings on Rhos Road.

The Co-operative Society purchased the property in 1974.  Whilst it levelled the floor and demolished the stage it retained much of the terracotta façade.  The use by the Coop ceased in 2019. 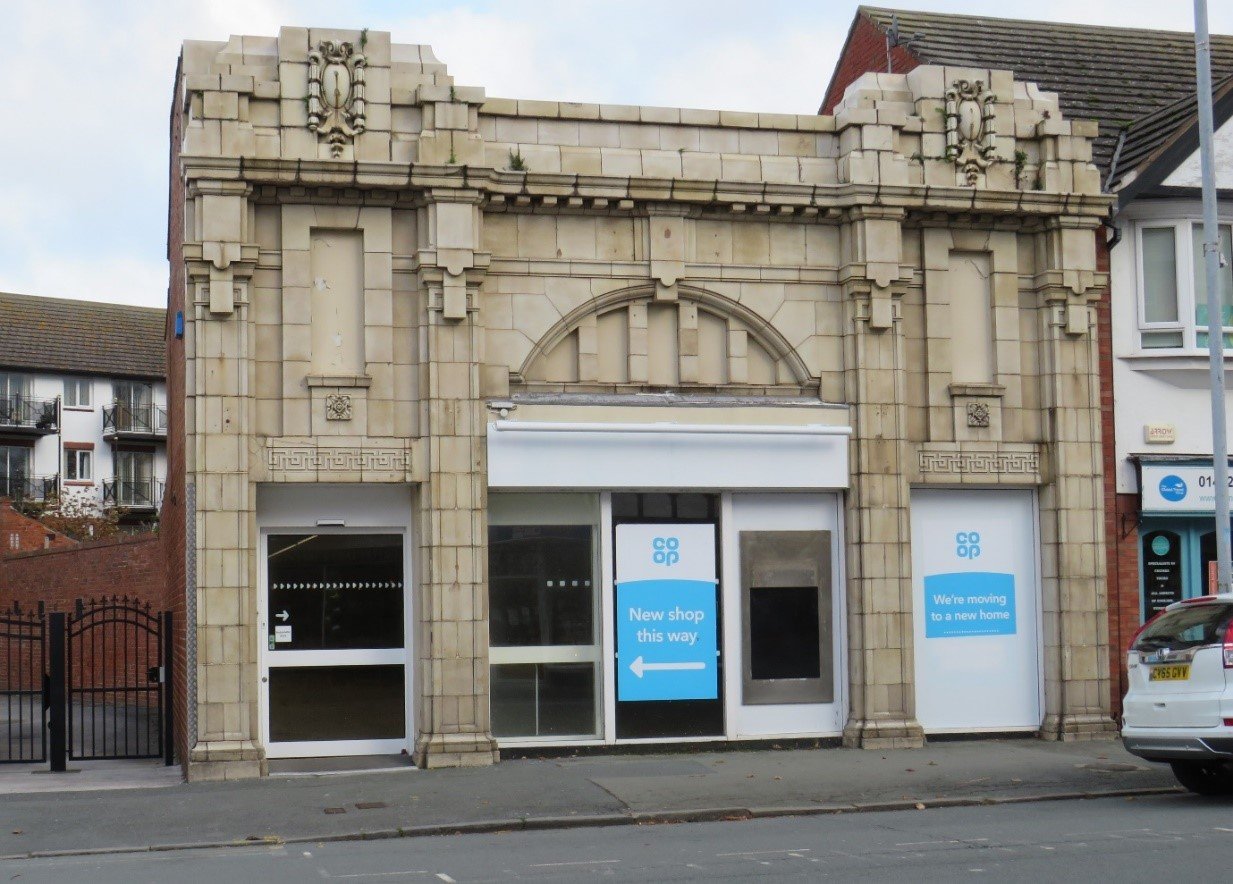 Former Rhos Playhouse as it is today

As the front elevation is faced in terracotta, a basic understanding of this material may be useful before examining the design and detailing of the elevation.

The information which follows is taken from ‘Building Construction’ Vol 4, (1968 edition) by J.K.McKay. Readers are referred to this book if they wish to learn more about this material, its manufacture, fixing applications etc. Terracotta is made from special clays capable of being moulded and kiln fixed to make either hollow building blocks, used for walling or in the form of slabs as an application to internal and external wall finishes. Terracotta is available in two different finishes – unglazed and glazed, (also known as faience) the latter having a smoother, more polished surface than the unglazed variety.  The manufacture of terracotta requires considerable skill and careful control of the various processes.  It can be moulded into any shape and it has good weathering and fire resistant properties. It is dense and very durable and its nonporous surface can be readily cleaned. Its natural self-colour varies from buff to red, with grey also available: faience can be produced in any colour.

The front elevation of the former cinema is faced in a buff coloured faience with a wide central part with a bay on each side.  Fortunately much of the original front elevation has survived largely intact, except for the removal of the central entrance and whatever existed in the right and left hand openings in the bays.  At present the original entrance has been filled in and the left hand opening was the door to the retail store. The right hand opening has also been filled in.

There are four pilasters, each one rising from a low plinth, one on each corner and two inner ones which frame the central portion, as well as framing the outer bays with the corner pilasters.

A decorative band of geometric ornamentation of horizontal and vertical straight lines runs above each of the ground floor openings in the two outer bays, above which are tall recessed panels, now boarded in.  It is possible that these panels or openings were originally glazed.  If that is the case, they may survive underneath the panels, and hopefully they could be restored if and when a new use is found for the building and refurbishment and restoration work undertaken.

Between the band of geometric ornamentation and the panels referred to above there is a florally inspired square decoration in each of the outer bays.

The pilasters are capped by capitals which line up with the cornice supported by corbelled brackets.

The central part of the front, ie. between the two inner pilasters, has a wide moulded, segmental arch above what was the entrance to the cinema. Under the arch are four small pillars which divide the space under the arch into five openings, now boarded in, possibly, or probably even, originally glazed.  A moulded string course runs across the top of the arch.  Note the ‘keystone’ – rectangular with a semicircle underneath – as at the top of the pilasters.

The front elevation is, then, of considerable interest and value in terms of the architectural history of Rhos on Sea and its history generally.

It is all too easy to walk by a building like this without pausing to study its design, detailing ornamentation, materials and its original purpose.  There is, in fact, much more to this elevation than one might expect and the building offers a local opportunity to appreciate what can be achieved using terracotta.

The contemporary photograph of the building as a cinema shows the central entrance consisting of four doors (possible the doors flanked by glazed panels) and what may have been a ticket office on the left hand bay.

It is to be hoped that a new and appropriate use will be found and that sympathetic restoration and adaptation will take place.  This will offer the opportunity to reinstate or restore any surviving glazing and making much more of the central doorway opening.

We are the Colwyn Bay Heritage Group. Our aim is to make the heritage and history of the Colwyn Bay easily accessible and better known amongst those who live here or are  interested in understanding … END_OF_DOCUMENT_TOKEN_TO_BE_REPLACED