Summary: The Dingle is a pleasant bridleway connecting Abergele Road and The Promenade and is one of the few access points between Colwyn Bay town and the adjacent promenade and beach. Path length is about 500 metres and total woodland area is about 2.5 Hectares but not all is accessible due to steep banks and about half of the land is in private hands. 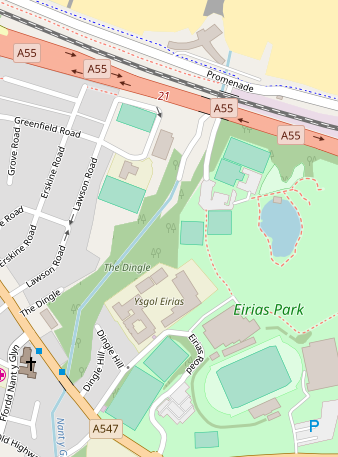 The Dingle is a pleasant bridleway connecting Abergele Road and The Promenade and is one of the few access points between Colwyn Bay town and the adjacent promenade and beach.  Path length is about 500 metres and total woodland area is about 2.5 Hectares but not all is accessible due to steep banks and about half of the land is in private hands.  The Nant y Groes runs alongside the bridleway for most of its length with side paths leading to Eirias Park and the town.  There is car access for a short distance at each end to serve houses and businesses but there is no visitor parking.  However, there is adequate, nearby parking on the Promenade and Porth Eirias and in Eirias Park close to the footpath access.

Photographs from the early 20th century show that the Dingle was a popular walking area as indicated on several postcards.  It then became an excellent adjunct to Eirias Park during the mid 20th century.  However, the excellent Dingle Café facility was lost to the A55 development in the 1980’s.  By year 2000, the area was in a poor state with a litter choked stream.  Since 2002, efforts by Colwyn Bay Conservation and Environment Federation, working with the Local Authority, have achieved notable improvements such as repaired and new paths, improved drainage, an improved tree population and foliage planting and new stream walls.  Periodic litter picks are arranged to counter the tendency of some to use the stream as a refuse dump.  Further improvements are being planned.  The illustration below summarises some of the work carried out in recent years. 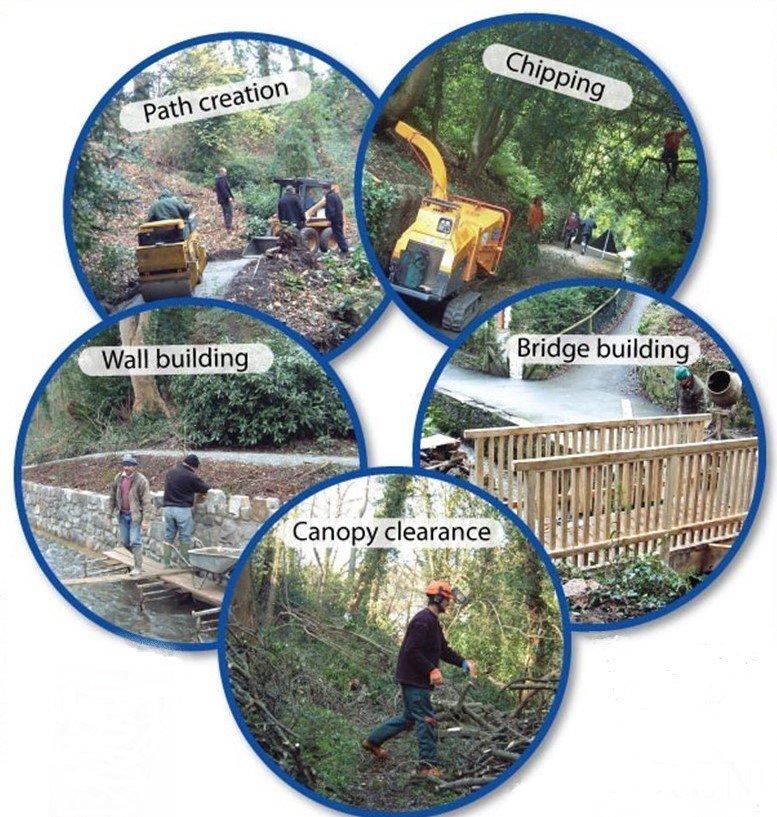 Many of the houses in The Dingle date from the 19th century.  At the Promenade end, the earliest available map of 1875 shows that the main terrace of six houses was already present.  However, this 6-inches to the mile map is not specific to actual houses.  A 25-inches to the mile map of 1911 shows that all of the main block of houses on the east side were present by then.  Two more houses, adjacent to the steep path to Eirias Park appeared in 1926.  Finally, there is a modern house on the west bank which is out of keeping with all the traditional houses and cottages.  At the Abergele Road end was the Plas y Coed Hotel and further houses, as Abergele Road was approached, which are little different to the present arrangement.  The hotel was badly damaged by fire in 1999 and has now been replaced by houses and a block of flats.

In 1920 the Council was trying to negotiate a proper approach to The Dingle from Abergele Road.  At that time, there was a bridge, comprising little more than a wooden plank and handrail, to take the path past the Plas y Coed Hotel towards Abergele Road.  An option to follow the stream to meet Abergele Road at the Pont y Groes was abandoned due to landowner intransigence and a steel bridge created the present-day Dingle route.

In 1911 there was only one steep path to the Eirias Park area and was probably there to serve Eirias House perched above the Dingle and adjacent to the present-day car park.  Near where the Dingle path crosses the stream, at the approach to Abergele Road, a zig zag path led from The Dingle up to the top of Dingle Hill.  The path was still showing in a map of 1948. The only remaining sign nowadays may be a heavy rusted gate, almost invisible in the foliage, in Dingle Hill.

On the western bank, Dinglewood School was established in 1884 having moved from Alderley Edge in Cheshire.  This building became the Edelweiss Hotel, now demolished and to be replaced by housing.  The separate school drill hall is now a nearby bungalow. The school could be approached from The Dingle by a small footbridge of which there have been many manifestations.

The Canopy Layer comprises mainly sycamore, oak, ash, horse chestnut, some cherry and yew.  The tree trunks carry ivy which supports bats and, as it flowers in the autumn/winter provides a valuable food source for insects.  It also attracts moths at night which, in turn, attract feeding bats.  However, too much ivy can threaten the trees, so it has to be thinned occasionally.

Ground Flora include male fern, harts tongue fern, bluebells, welsh poppy, snowdrop and wild garlic.  False brome is widespread; its graceful drooping heads indicate that the soil is non-acidic but base rich.  For the same reason, the ash tree thrives.  Other ground flora include wood avens, ivy, enchanter’s nightshade and lords and ladies or cuckoo-pint.

Birds who visit or live in The Dingle include grey wagtail on the river, blue tit, blackbird, jackdaw, wood pigeon, bullfinch, greater spotted woodpecker, coal tit, long tailed tit, dunnock, robin, tawny owl, chaffinch and wren and of course bats.  There are numerous bird boxes, made by volunteer pupils at Eirias High School.  Other fauna include badgers, grey squirrels, bank vole and foxes.  At one time, freshwater fish were seen in the Nant y Groes stream but recent dry summers and low stream flows have almost wiped these out.

We are the Colwyn Bay Heritage Group. Our aim is to make the heritage and history of the Colwyn Bay easily accessible and better known amongst those who live here or are  interested in understanding … END_OF_DOCUMENT_TOKEN_TO_BE_REPLACED