There are no records of the first Quaker meetings in Colwyn Bay although it is safe to assume that they began in peoples’ homes in the 1890s. This was about the time of the development of Colwyn Bay as a residential area and holiday resort and a small number of Quakers, the Religious Society of Friends, had chosen to move to the town in their retirement.

In 1899 the Quakers moved from their house meetings to a room in Central Buildings. The North Wales Weekly News and Visitors Chronicle of 13th January 1899 records that a ‘Meeting for Worship is held at 11.00am every First Day at a room in Central Buildings (facing Station Road), Colwyn Bay’. Meetings must have continued there whilst the present Meeting House in Erskine Road was being planned and developed. 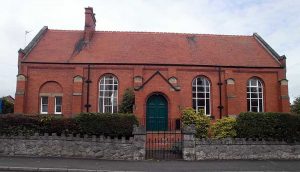 The Meeting House was given to the Quakers by a family named Barlow who, although not Quakers themselves, respected their beliefs and integrity.  Attendance has fluctuated over the years but regular worship has been unbroken since 1899.

Today Quakers work to resolve conflict in war torn parts of the world, bringing together representatives from opposing factions at local and international level in their Meeting Houses in the hope that meeting on neutral ground will help them better understand each other and their differences.

The Friends Meeting House stands on the western side of Erskine Road. The building is one of a number of markedly red chapels to be found in the town with its red tiled roof, red brick walls and red brick chimney.

As a contrast to the brick, sandstone has been sparingly used for the gable parapets, to the tops of the buttresses and window lintols. The elevation facing Erskine Road is simply, but pleasingly designed with bays divided by shallow buttresses with semi-circular arched windows in between with clear glazing.

Particular features to note include the front porch with its arched doorway in moulded brick and the pair of dark green paneled doors. A circular window high on the otherwise blank north gable is divided into nine stained glass panels.

A two storey house, standing at the southern end, forms part of the complex.

The grounds of the Meeting House and the garden of the house lie behind a limestone wall with cock and hen coping – very typical of the town.

Booklet prepared in connection with an exhibition held in 1989 to provide information about the Quaker meeting in Colwyn Bay.

We are the Colwyn Bay Heritage Group. Our aim is to make the heritage and history of the Colwyn Bay easily accessible and better known amongst those who live here or are  interested in understanding … END_OF_DOCUMENT_TOKEN_TO_BE_REPLACED